MPOV: Everything I never told you 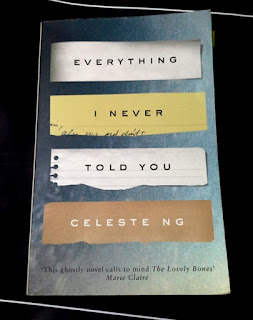 A story about a mixed parentage family, something uncommon during the 70's and usually frown upon, their lack of communication plus denials which eventually caused friction in the family. James, a Chinese, married Marilyn, a white American, and together they have 3 children, Nathan, Lydia and Hannah. Being different then, they have to endure being bullied, the loneliness without many friends and the clueless life they are in.

James has hopes that his children will have many friends and be popular especially Lydia as she has her mother's eyes. Marilyn seemed clueless of the fact that they are different and harboured dreams that her daughter, Lydia, will be a doctor someday. Nathan just can't wait to go to Harvard to live his dreams of being an astronaut and leaving the abandonment behind. Lydia has been the centre of her parent's affections but felt suffocated and can't wait to leave everything behind. Hannah, the youngest but always in Lydia's shadow, voiceless in the family but the most observant of all.

It is so typical of a family lack of communication, always in denial with every issues swept underneath the rug. Especially in a conservative family, such unhealthy practice can cause mental strains and psychological breakdowns. Like what happened to Marilyn, instead of talking it over with James, she had ran away to try to pursue her doctor dream. If Lydia had consulted with her brother instead of bottling it up, she would not have accidentally drowned. If James had talked to Marilyn, he would not have had a relationship with Louisa. There were so many 'ifs'! All these could have prevented the inevitable, if they had let it all out and not kept bottling up.

Celeste has written well, tabling all the issues and capturing the significant moments. It may just be a story but it has captured as many human values and elements to be factored in. No wonder she took 6 years to complete this novel! I totally empathise the Lee's and also their neighbour, Jack, who's in love with Nathan. The only slack I felt was the ending, knowing that it was an accidental death and not suicide somehow pared down the mysterious ending.

A couple of quotes which I find memorable:

'For every action, there is an equal and opposite reaction.'