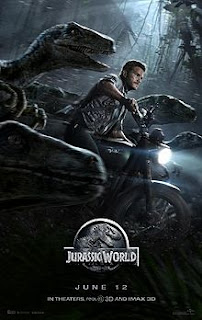 Twenty-two years after the incident at Jurassic Park, a new theme park, Jurassic World, now operates in Isla Nublar. Brothers Zach and Gray Mitchell are sent there to visit their aunt, Claire Dearing, the park's operations manager. Claire's assistant is their guide as Claire is too busy recruiting corporate sponsors with a new attraction, a genetically modified dinosaur called Indominus rex. The dinosaur has the DNA of several predatory dinosaurs as well as modern-day animals; chief geneticist Dr. Henry Wu keeps the exact genetic makeup classified.

Owen Grady trains the park's Velociraptor pack that considers him their alpha. Hoskins believes they can be trained for military use, but Owen disputes this. Park owner Simon Masrani has Owen evaluate the Indominus‍‍ '​ enclosure before the attraction opens. Owen warns Claire that the Indominus is particularly dangerous because it is not socialized to other animals.

Owen and Claire discover that the Indominus has seemingly escaped. Owen and two staff enter the enclosure, but the Indominus ambushes them, having faked its escape, and disappears into the island's interior. Owen suggests killing it, but Masrani sends the Asset Containment Unit to capture the dinosaur alive. When it kills most of the team, Claire orders the northern portion of the island to be evacuated.

The movie was action packed with non-stop excitement and got me on my toes, biting my nails the whole time! So nerve wrecking! Truly a remarkable movie albeit some predictable plots but well acted out. The brothers, Zach and Gray, were really good and the Indominus Rex was terribly horrific! Overall, it was well-blended and realistic with awesome CGIs. I was so partial to Blue, a trained raptor *wishing she was my pet*. A sequel will be released on June 22, 2018 so I'm wondering what is next since Dr. Henry Wu managed to escape with most of his prototypes.