We decided to have a late supper here the other night while on the way balik kampung. It's located along Jalan Panggung Wayang in Bidor. As it was late so it's actually quite dark but there's another stall next to it, did not check it out though as we were dead tired. 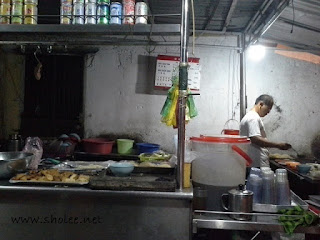 It's a fairly decent meal with springy noodles as opposed to slimy ones. Taste may be average but I liked the springy noodles so it is a plus point for me. Also the wan tan (dumpling) was freshly made, another plus point and it was delicious, without those 'fridge smelling' taste of meat. The side dishes were also heated up in warm soup which was really comforting. A simple meal to appease the late hunger pangs which was convenient and unassuming.

It's economical too at RM16.40 for 2 sets of wan tan mee and  loads of side dishes (didn't count ler) inclusive of an iced herbal drink. Nothing fancy, just a cooling neighbourhood and a friendly proprietor. Non-appealing to some since it's on the road side but it is just nice for me. Just enjoy the food and leave, easy as that.

Rating: 3/5
Location: along Jalan Panggung Wayang, Bidor (I think they only opened for dinner to supper)
Type: non-halal
Email ThisBlogThis!Share to TwitterShare to FacebookShare to Pinterest
Sections: Food