MPOV: The Gift of Rain 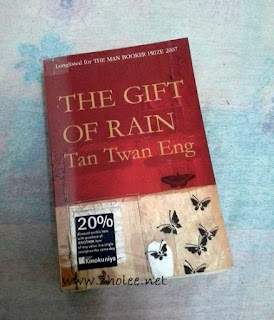 This book tells the journey of a boy of mixed parentage, Philip Arminius Khoo-Hutton. His main passage started the day he met his aikido sensei, Hayato Endo, a Japanese diplomat. This book was written in 2 parts - the first is pre-war and the second is during the war.

Set in Penang during the World War 2, the first part revolves around a young Philip on his difficulty of being accepted in society as a mixed blood which was uncommon during those time, the distance he felt within his family, the bullying he received at school, all of which led to his low self esteem. With the help of Endo San, he slowly began to accept himself and regained confidence, increasing his self worth. This also led to a better family ties which his father, Noel Hutton, really appreciates but also worried due to the prediction of a soothsayer previously.

The second part is when the Japanese slowly crept into Malaya, a turning point between Philip and Endo as the invasion slowly taking place. This has ultimately made Philip realised that he has been used by Endo, in turned made him closer to his family. A lot of treachery and misunderstanding during the war with the Japanese's cruelty hitting full force.

Truly a remarkable storyline, beautifully written with so much descriptive paragraphs with smooth flow of words to slowly digest, preferably not for speed reading. I can understand how Philip felt, his evolving self from boy to man and his loyalty values. How he was betrayed, his ethical upbringing with so much conflicts in life was so heart wrenching. Definitely a memorable read, a book worth investing for.

To be honest, I have shelved this book many times as it is a heavy read. Now I do regret shelving it as it is an incredible book! Well, better late than never! To quote Philip: The mind forgets but the heart will always remember.

New word: Soothsayer (noun): someone who makes predictions about what is going to happen in the future