MPOV: The Curious Incident of The Dog in The Night-Time 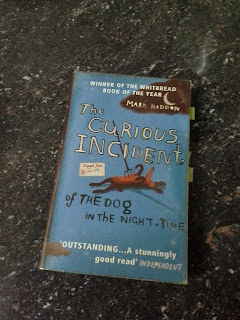 Christopher John Francis Boone knows all the countries of the world and their capitals and every prime number up to 7,057. He relates well to animals but has no understanding of human emotions. He cannot stand to be touched. And he detests the color yellow.

Although gifted with a superbly logical brain, for fifteen-year-old Christopher everyday interactions and admonishments have little meaning. He lives on patterns, rules, and a diagram kept in his pocket. Then one day, a neighbor's dog, Wellington, is killed and his carefully constructive universe is threatened. Christopher sets out to solve the murder in the style of his favourite (logical) detective, Sherlock Holmes. What follows makes for a novel that is funny, poignant and fascinating in its portrayal of a person whose curse and blessing are a mind that perceives the world entirely literally.

I read this first due to the many recommendations in my book club. True enough, it was a really good read with a refreshing storyline, uniquely Mark's. Loved how he could explained and narrated from the mind of an Asperger's Syndrome. I felt I could relate to some, if not all, the hindrance Christopher has to endure and also his parent's difficulties in bringing up Christopher. It's so pure and straightforward. The sudden inclusion of Malaysia towards the end was totally surprising. I guess nothing is as predictable as it seemed. Truly enjoyed it.

Since Christopher is a maths and science whiz, the inclusion of it in the book was educational. In a way, it does promote the importance of education and I liked that he thinks of his future. A very smart yet responsible boy even though he's not mentally as perfect. Actually, to think of it, it's more of an OCD thingy... just a little extreme, that's all.