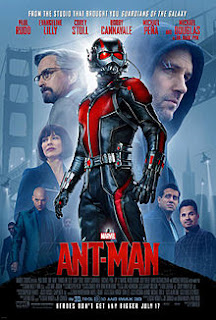 In 1989, scientist Hank Pym resigns from S.H.I.E.L.D. after discovering that they attempted to replicate his Ant-Man shrinking technology. Believing the technology is dangerous, Pym vows to hide it as long as he lives. In the present day, Pym's estranged daughter, Hope van Dyne, and former protégé, Darren Cross, have forced him out of his own company. Cross is close to perfecting a shrinking suit of his own, the Yellowjacket, which horrifies Pym.

Upon his release from prison, well-meaning thief Scott Lang moves in with his old cellmate, Luis. Lang's ex-wife, Maggie – engaged to policeman Paxton – agrees to let Lang see his daughter Cassie if he provides child support. Unable to hold a job due to his criminal record, Lang agrees to join Luis' gang and commit a burglary to get money. Lang breaks into a house and cracks its safe, but only finds what he believes to be an old motorcycle suit, which he takes home. After trying the suit on, Lang accidentally shrinks himself to the size of an insect. Terrified by the experience, he returns the suit to the house, but is arrested on the way out. Pym, the homeowner, visits Lang in jail and smuggles the suit into his cell to help him break out.

At his home, Pym, who manipulated Lang through Luis into stealing the suit as a test, wants Lang to become the new Ant-Man to steal the Yellowjacket from Cross. Van Dyne, who has been spying on Cross for Pym despite her strained relationship with her father, helps Pym train Lang to fight and to control ants. They send him to steal a device from the Avengers' headquarters, where he briefly fights Sam Wilson. While van Dyne still shows anger towards Pym about her mother's death, he reveals that her mother, known as the Wasp, disappeared into a subatomic quantum realm to disable a Russian nuclear missile. Pym warns Lang that he could suffer a similar fate if he overrides his suit's safeguards.

This is as real as it gets. Totally logic especially since it's based on science and technology so this movie makes sense with all the molecular talks and subtomic quantum physics. It may dragged a little at the start but the action stunts toward the end made up for it. Paul Rudd made a fantastic Ant-man. A really cool movie to watch in the cinema... don't forget to wait until the main mid credit ends. Can't wait for the next sequel with Evangeline as Wasp!

Oh no! I just found out there is another post credit scene at the end which is related to Captain America and the Civil War! Damn, missed it! No wonder the lights were not on after the mid credit scene.

P/S: I didn't sound as excited as I was interrupted most of the time during the movie as someone had brought a autism sister along. I couldn't concentrate much hence the distracted review.