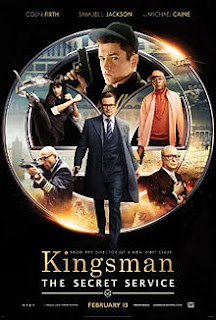 During a raid in the Middle East in 1997, a probationary secret agent sacrifices himself to save his team. Feeling guilt over the loss of his colleague, Harry Hart, code-named "Galahad," personally delivers a bravery medal to the agent's widow, Michelle Unwin, and his young son, Gary "Eggsy", saying that if they ever need help, they should call the phone number on the back of the medal and deliver a coded message.

Seventeen years later, Professor James Arnold is kidnapped by unknown assailants, led by Internet billionaire Richmond Valentine and his henchwoman Gazelle. One of Hart's compatriots, "Lancelot," attempts to stage a rescue, but fails as he is cut in half by Gazelle. Valentine, known for his philanthropy, continues to meet with various heads of state and VIPs; some of whom go missing afterwards. He also announces a giveaway of SIM cards, granting free cellular and Internet access.

In London, Eggsy is now an unemployed young adult living with his mother, infant half-sister, and abusive stepfather Dean. Despite being intelligent and capable, he left training for the Royal Marines and lives an aimless life. After being arrested for stealing a car and taking it for a joyride, Eggsy calls the number on the back of the medal. Hart arranges for his release and tells Eggsy about the existence of Kingsman, a secret intelligence agency for which both he and Eggsy's late father worked. In the wake of Lancelot's death, the agency opens a vacancy for a new agent, and Eggsy agrees to apply. He joins a group of other candidates, including a woman named Roxy. Training is overseen by "Merlin," a senior Kingsman who acts as teacher, quartermaster, pilot and Ops coordinator. The candidates are eliminated one by one until only Eggsy and Roxy remain as the final two. However, Eggsy fails his final test, and Roxy becomes the new Lancelot.

In truth, I do enjoy the movie. Well made, very classy yet comical. However, the ending sort of killed the movie with all those fireworks. No spoilers here but it was unrealistic. I guess it made the movie less gory hence I was able to watch the whole movie. In short, a stylishly made movie with all 3 elements of JB's (James Bond + Jason Bourne + Jack Bauer) in 1! LOL! Also loved the tailor-made suits! The quote by Galahad 'Manners Maketh Man' really stuck to my mind though.