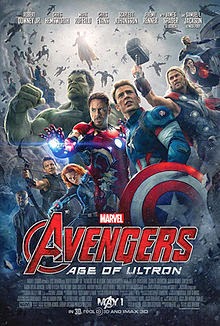 During a victory celebration at Avengers Tower, Stark and Banner utilize an A.I. found within Loki's sceptre and activate Stark's secret program, Ultron, envisioned as part of Stark's robotic "Iron Legion" to safeguard the planet. Ultron, believing he must eradicate humanity to save Earth, eliminates Stark's A.I. J.A.R.V.I.S. and attacks the Avengers. Following the battle, the team confronts Stark for his secrecy, while Ultron, having stolen the sceptre, goes to Sokovia to build a new body in Strucker's lab. He recruits the Maximoff twins, who harbour a grudge against Stark for weapons responsible for their parents' deaths. Deducing that Ultron wants to utilize vibranium, the team travels to the Wakandan shipyard base of arms dealer Ulysses Klaue. After retrieving the vibranium, Ultron and the Maximoff twins battle the Avengers. After destroying Ultron's body, Stark uses his large "Victoria" armour to confront a rampaging Hulk, who has been hypnotized by Wanda's visions. Although Stark defeats the Hulk, world backlash sends the team into hiding.

Taking refuge in Barton's safe-house farm, they meet Barton's wife, Laura, and children. Romanoff and Banner realize their attraction and plan to flee together after fighting Ultron. Having hallucinated about a future apocalyptic event, Thor consults with Dr. Erik Selvig. At the Barton home, Nick Fury encourages the team to form a plan to stop Ultron. Banner deduces Ultron will create his perfect form through a synthetic body developed by Banner's friend Dr. Helen Cho, in Seoul, South Korea. Ultron hypnotizes Cho, retrieves the body, has her implant the sceptre's gem, and begins uploading himself into the body. Rogers, Romanoff and Barton hunt Ultron in Seoul. When Wanda enters Ultron's mind and discovers his extinction-level plan, the Maximoffs turn on Ultron. Ultron captures Romanoff, and Barton retrieves the synthetic body for Stark, causing the twins trepidation.

A little drama, a little romance, a little comedy with loads of action! This movie got my full attention even though I was damn sleepy watching it past midnight yawn! Quite a few wow moments, is it? factors with quite a lot of CGIs to complete the movie but realistically enough to enjoy. I was in awe with Wanda's abilities, well she is the Scarlet Witch, and Elizabeth was really good at it :-) Btw, there is a 2 sec tag after the main credit but no final post credit scene.

I can't wait for the third Avengers which has been split to 2 parts and will be shown in 2018 and 2019 respectively. I wonder who's the confirmed casts... only know that Joss will not be directing both and the Russo brothers are taking over.