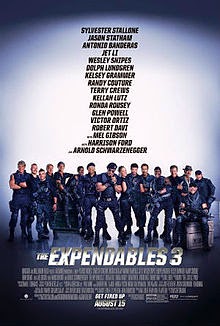 The Expendables led by Barney Ross (Sylvester Stallone) and formed by Lee Christmas (Jason Statham), Gunnar Jensen (Dolph Lundgren) and Toll Road (Randy Couture) extract former member Doctor Death (Wesley Snipes), a knives specialist and team medic, from a military prison during his transfer on a train. They recruit Doc to assist them in intercepting a shipment of bombs meant to be delivered to a warlord in Somalia. Arriving there, they reunite with Hale Caesar (Terry Crews), who directs them to the drop point where Ross is surprised to find out that the arms trader providing the bombs is Conrad Stonebanks (Mel Gibson), a former co-founder of the Expendables who went rogue and was presumed dead. In the ensuing firefight, they are forced to retreat due to Stonebanks' advanced weaponry, and Caesar is severely injured in the process.

Back at the United States, CIA operative Max Drummer (Harrison Ford), the Expendables' missions manager, gives Ross a mission to capture Stonebanks in order to bring him to the Hague International Criminal Court to be tried for war crimes. Blaming himself for Caesar's injuries, Ross disbands the Expendables, not wanting his team to get killed following him, and leaves for Las Vegas where he enlists retired mercenary Bonaparte (Kelsey Grammer) to help him find a new team of younger mercenaries to pursue Stonebanks. The recruits include ex-Marine John Smilee (Kellan Lutz), nightclub bouncer Luna (Ronda Rousey), computer expert Thorn (Glen Powell) and weapons expert Mars (Victor Ortiz). Skilled sharpshooter Galgo (Antonio Banderas) advocates to be included in the team, but Ross turns him down. The new team rendezvous with Ross' rival Trench Mauser (Arnold Schwarzenegger), returning a favor for Ross, who has traced Stonebanks to Romania where he is set to make an arms deal. Ross and the new recruits infiltrate an office building used as a meeting place by Stonebanks for the deal and capture him in order to deliver him to Drummer. However, Stonebanks' men catch up to them and fire a missile at the team's van. Ross is thrown into a river, while Smilee, Luna, Thorn and Mars are captured by Stonebanks.

It was so so so hilarious! All the old actors really seemed to have a ball doing this movie! Definitely way better than the first 2. Having some young newcomers were cool but the old ones were the entertaining ones. Fun to watch for a good, hearty laugh.