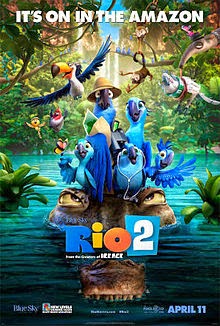 Blu and Jewel enjoy life in Rio with their 3 kids, the oldest and music-loving Carla, book smart Bia, and the youngest and mischievous Tiago. Meanwhile, Blu's former owner, Linda Gunderson and her ornithologist husband, Tulio are on an expedition in the Amazon and eventually discover a quick-flying spix's macaw that loses one of its feathers. When word gets out about this through television, Jewel believes that they should go to the Amazon to help their human friends find them. While the kids are ecstatic, Blu is uncertain, but is pressured into going along. Rafael, Nico and Pedro decide to come along. Luiz attempts to follow, but fails. Blu brings a fanny pack full of supplies, one of which he uses mostly is a GPS, much to Jewel's displeasure.

Meanwhile, the leader of a group that is in a line of illegal logging named Big Boss, discovers Linda and Tulio's expedition to find the macaws and orders his minions to hunt them down to avoid disruptions to their work. Also, Blu and Jewel's old enemy, Nigel the cockatoo has survived the plane crash from the first film, but is now unable to fly and is working as a fortune teller/con artist. When he sees Blu and his family flying overhead of him, he wastes no time deciding to go after them in revenge. He enlists two minions to help him in his plans; a silent anteater named Charlie and a poison dart frog named Gabi, the latter of which is in love with Nigel. Blu and his family use a boat to get toward the jungle (with Nigel's first plan of revenge being inadvertently foiled by Charlie), and when they arrive, they find nothing in sight. However, they are eventually taken to a flock of blue macaws that are hiding in a secret paradise land. There, they meet Jewel's stern long lost father, Eduardo, his older sister Mimi, and Jewel's childhood friend, Roberto. Eduardo seems unimpressed with Blu's domesticated behavior.

While searching for the macaws, Linda and Tulio are eventually trapped by the loggers. Meanwhile, Blu does his best to fit in with the flock, as his family and friends are doing, who are against humans and all things human. Blu fails at Eduardo's survival techniques when the former takes Blu out to train him to be like one of the flock. Meanwhile, Nigel plans to kill Blu at the new Carnival show after landing in an audition hosted by Rafael, Nico, Pedro, and Carla, while in disguise as a bird named Bob. When Blu tries to pick a Brazilian nut for Jewel, he accidentally tries to get it in the territory of the Spix Macaw's enemies, the Scarlet macaws, led by the hostile Felipe. Blu inadvertently causes war between the two tribes for food when he accidentally hits Felipe with a twig. The war turns out to be just like football (soccer), and Blu accidentally costs the flock the food when he sends the fruit ball into his own teams goal, much to Eduardo's frustration. Blu and Jewel then have a falling out afterwards, which causes Blu to go find Linda.

Colourful characters, typical storyline and child friendly. As simple as that. Kids will be entertained, parents will have a good laugh and in the end, everyone is happy.