MPOV: Dawn of the Planet of the Apes 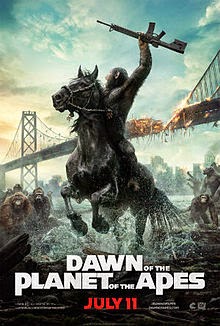 Starting in 2016, the ALZ-113 virus causes the collapse of human civilization. Ten years later, Caesar leads and governs a new generation of apes in a community located in the Muir Woods. While walking through the forest, Caesar's son Blue Eyes and Rocket's son Ash encounter a human. The human, Carver, panics and shoots Ash, wounding him. Carver calls for the rest of his small party of armed survivors, led by a man named Malcolm, while Blue Eyes calls for the other apes. Caesar orders the humans to leave. The remaining humans in San Francisco, genetically immune to the virus, are living in a guarded tower within the ruined city. Prompted by Koba, a scarred bonobo who holds a grudge against humans for his mistreatment, Caesar brings the apes to the city where he orders the humans to never enter ape territory again.

Malcolm convinces his fellow leader Dreyfus to give him three days to reconcile with the apes to gain access to a hydroelectric dam in their territory, which could provide long-term power to the city. Dreyfus, distrustful of the apes, arms survivors using an abandoned armory. Caesar allows Malcolm to work on the dam's generator, provided they surrender their guns. As Malcolm, his partner Ellie, and son Alexander work, they bond with the apes. Mutual distrust of both sides gradually subsides but trust momentarily comes to a standstill when Carver threatens Caesar's newborn with a concealed weapon. The sides reconcile as Ellie is allowed to treat Caesar's ill wife Cornelia with antibiotics. Meanwhile, Koba discovers the armory and confronts Caesar, questioning his allegiance. In response, Caesar heavily beats Koba, but refuses to kill him and forgives him. Koba returns to the armory and, after murdering two human guards, steals an assault rifle. He then kills Carver, stealing his lighter.

The dam is eventually repaired, restoring power to the city. During the celebration, Koba, unnoticed, has the apes' home set ablaze. Unseen by anyone else, Koba and Caesar lock eyes as Koba shoots Caesar in the chest, causing him to presumably fall to his death. In the panic of the loss of the Alpha and the fire, Koba takes charge, placing the blame on Malcolm's group and orders the apes to war against the humans. Malcolm's group hides as Koba leads the apes into San Francisco. They plunder the armory and charge the tower's gates. Despite heavy casualties, the apes overrun the tower and imprison all the humans as Dreyfus flees underground. When Ash refuses Koba's orders to kill unarmed humans, citing Caesar's teachings, Koba kills Ash and jails all apes loyal to Caesar.

I barely recalled the first movie so it was refreshing watching this. Honestly, it was dramatic yet toe clenching throughout the movie! I was tired but I was totally into it... yes, it was THAT good! Worthwhile watching it in the cinema with all the sound system shenanigans! Of course, CGI played a huge role but it was damn realistic, as though Caesar is just like another guy and Koba is just another bandit. Can't wait for the third movie which is coming on 29th July 2016.