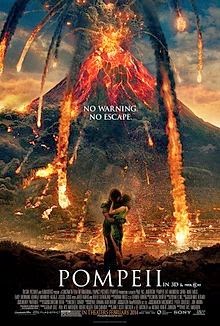 The film opens with scenes of the bodies of victims of Pompeii as quotes on the destruction are made.

In Britannia, 62 AD, a tribe of Celtic horsemen are brutally wiped out by Romans led by Corvus (Kiefer Sutherland). The only survivor is a boy named Milo (Dylan Schombing), whose mother Corvus killed personally. The boy is captured by slave traders. Seventeen years later, a slave owner named Graecus (Joe Pingue) watches a class of gladiators battle. He is unimpressed until he sees the grown Milo (Kit Harington), a talented gladiator the crowds call "the Celt." Milo is soon brought to Pompeii with his fellow slaves. On the road, they see a horse fall while leading a carriage carrying Cassia (Emily Browning) and her servant Ariadne (Jessica Lucas). Milo kills the horse to end its suffering and Cassia is drawn to him. Cassia is the daughter of the city ruler Severus (Jared Harris) and his wife Aurelia (Carrie-Anne Moss), happy to have her back after a year in Rome. Severus is hoping to have the new Emperor Titus invest in plans to rebuild Pompeii but Cassia warns him of Rome becoming more corrupt. A servant named Felix (Dalmar Abuzeid) takes Cassia’s horse for a ride only to be swallowed up when a quake from Mount Vesuvius opens up the Earth under him.

At the gladiator arena, Milo soon has a rivalry with Atticus (Adewale Akinnuoye-Agbaje), a champion gladiator who by Roman law will be given his freedom after he attains one more victory. The gladiators are shown off at a party where Corvus (now a Senator) tells Severus the Emperor will not invest in his plans but Corvus will. It turns out Cassia left Rome to escape Corvus’ advances. When an earthquake causes horses to become excited, Milo helps calm one down. He then takes Cassia on a ride, telling her that they cannot be together. Returning to the villa, Corvus is ready to kill Milo (not recognizing him from the village massacre) but Cassia pleads for his life. Milo is lashed for his actions and Atticus admits respect for the man as they prepare to face each other at the upcoming festival.

The starting reminds me of a scene from Transformers =.= Anyway the views may be breathtaking but the storyline was lull and uninteresting... predictable too. It is definitely a very sad epic love story, well the ending was sad, but it didn't catch my breath. Aside from the gruesome fights as in other gladiator type movie which was exciting a little, other than that didn't meet the expectation.