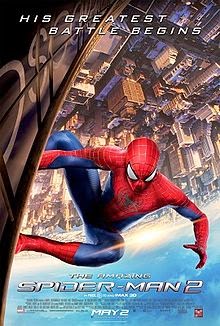 Scientist Richard Parker records a video message to explain his disappearance. Later, he and his wife, Mary, are aboard a private jet hijacked by a man sent to assassinate Richard. With the pilot dead, the plane crashes.

In the present, Richard's son Peter continues to fight crime as Spider-Man. He pursues and apprehends Aleksei Sytsevich, who attempted to steal a truck containing plutonium vials. During the chase, Spider-Man rescues OsCorp Industries employee Max Dillon. While speaking by phone with Gwen Stacy, Peter sees a vision of her father, police captain George Stacy, reminding him to leave Gwen out of it. Afterward, Peter meets with Gwen at their high school graduation ceremony, but insists he needs to keep his vow to her father and ends their relationship.

Peter's childhood friend Harry Osborn returns to Manhattan to see his terminally ill father Norman, CEO of OsCorp. Norman explains his illness is hereditary, and Harry is at the age where it first develops. Norman gives Harry a small device he claims contains his life's work. The next day, Norman dies and Harry is appointed the new OsCorp CEO. He humiliates the OsCorp board, which has been privy to Norman's secret biogenetic projects for foreign military powers.

As a darker version, expect the unexpected. It was engaging with a good storyline and realistically cool CGIs. Dane DeHaan totally blew my socks off! He was sooo Harry! I think when he's evil, he played it better than James Franco. Even Jamie Foxx was sooo unexpected... as Max so creepy invisible and as Electro so evil cool! Wow! The transformations were off the wall! Totally enjoyed the movie but just can't quite accept the ending though. *Spoiler alert!* Spider-man saves everyone except Gwen! Why? Oh why they had to do that? Anyway, after the main credits end, for a moment I thought they were gonna show Spider-man 3 *slaps forehead* Instead, I was wondering why those people were damn familiar and suddenly there's Mystique =.= yeah... a preview of the new X-Men: Days of Future Past... jeez...