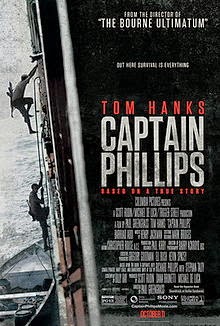 Richard Phillips (Tom Hanks) takes command of the MV Maersk Alabama, an unarmed container ship from Port of Salalah in the city of Salalah in Oman, with orders to sail through the Gulf of Aden to Mombasa, round the Horn of Africa. Wary of pirate activity off the coast of Somalia, the captain orders strict security precautions on the vessel and carries out practice drills.

During a drill, the vessel is chased by Somali pirates in two skiffs; Phillips succeeds in outrunning them when one gives up after hearing Phillips on the radio calling for immediate military air support (a bluff) and the other loses engine power while trying to gain speed under the rough water Captain Phillips created. The next day one of the skiffs, fitted with two outboard engines, returns with four heavily armed pirates led by Abduwali Muse (Barkhad Abdi); they are carrying a ladder they had hastily welded the night before. Despite the best efforts of Phillips and his crew, the pirates board and take control of the Maersk Alabama, capturing Captain Phillips after he cuts the ship's engine power and tells the crew to hide in the ship's engine room. Phillips offers Muse the contents of the ship's safe ($30,000), but, under orders from his boss (the local Somali faction leader), Muse's plan is to ransom the ship and crew in exchange for millions of dollars of insurance money from the shipping company.

A crew member manages to cut the ship's emergency power, plunging the lower decks into darkness. As Muse attempts to search the engine room, the crew members overpower him. Negotiating with the other three pirates, one with badly injured feet, the crewmen arrange to trade Phillips for Muse and the ship's lifeboat. The pirates force Phillips onto the lifeboat and launch it, intending to hold the captain for ransom.

Started off laid back, slow moe... and then the momentum started picking up... and then grit, excitement, panic towards the end! Phew! What a movie! Nearly had a heart attack watching this movie... I can truly feel the volatile  and grim scene of the hijacking... also the worry, pain, anger and panic of Richard through Tom Hanks. A fully emotional movie, truly realistic and Tom Hanks was at his element best! My most memorable scene was when Richard thought he was about to die and he quickly found a pen and paper, writing his last letter to his loved ones... it was so... no words for this. I was so into it... teary eyed and all.

Lastly, my hats off to the real Captain Phillips and his crews. It's truly amazing at how calm he was, even though panicking inside, to ensure the safety of his crews and finding ways to remote them from the pirates. His crews were also brave, trying to fight the pirates as best they can. When Richard was forced into the lifeboat, the ways he had to handle the pirates in such scary scenario was not easy at all. The best part, he lived to tell his story with thanks to the SEAL's expertise. A truly remarkable man that is Captain Richard Phillips.