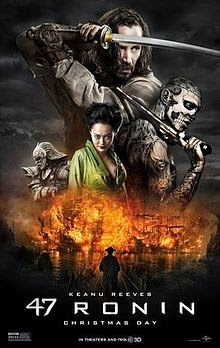 In feudal Japan, Kai is a half-Japanese, half-British outcast who lives in the village of Ako, ruled by the benevolent Lord Asano Naganori, who once found a young Kai lost in the woods and accepted him into his domain. Despite being rejected by the samurai led by Oishi due to his mixed ancestry, Kai becomes a skilled warrior and falls in love with Asano's daughter, Mika.

Ahead of the arrival of Shogun Tokugawa Tsunayoshi, Ako is visited by his master of ceremonies, Lord Kira, who becomes attracted to Mika. He arranges a fight between his best soldier, the Lovecraftian Samurai, and one of Oishi's men, Yasuno, who is later found under the spell of Kira's adviser, the witch Mizuki. Kai takes his place and fights the Lovecraftian Samurai, but is defeated and humiliated. Later that night, Mizuki bewitches Asano into believing Kira is raping Mika, causing Asano to attack an unarmed Kira, an offense punishable by death. The Shogun allows Asano to die honorably by committing seppuku, and brands Oishi and his men Ronin. Kira demands to marry Mika, but the Shogun grants her one year to mourn the death of her father, and forbids the Ronin from seeking revenge. To ensure this, Kira traps Oishi in a well in an attempt to break his spirit.
Nearly a year later, Oishi is released by Lord Kira's men. He reunites with his family and asks his son Chikara to reunite the Ronin, including Kai, who had been sold into slavery, to avenge Asano and save Mika. After the local blacksmiths deny the Ronin help out of loyalty to Kira, Kai leads them to the Tengu Forest, a mystical place he once escaped from as a child. Kai instructs Oishi to never draw his sword while in the Tengu temple and continues alone to another room. While Kai fights the Tengu Master, Oishi watches his men fighting the Tengu and dying. Oishi follows Kai's advice to never draw his sword and the illusion disappears; having earned the respect of the Tengu Master, the Ronin are given swords. Armed with their new weapons, the Ronin plan to attack Kira on his pilgrimage to prayer for his wedding. Instead, the group is ambushed by Kira's forces, led by Mizuki and the Lovecraftian Samurai. Several of the Ronin are killed, and Mizuki, believing to have slaughtered them all, takes Oishi's sword and presents it to Lord Kira as a trophy. Mizuki later taunts Mika with their death and attempts to manipulate Mika into killing herself.
The above taken from Wikipedia.

Honestly, a good movie... very intense drama with loads of actions and kicks with cool CGIs. There were mixed reviews of this movie, well, perhaps not up to their Samurai expectations. I just couldn't believe the ending. For 1, why do these honourable Samurai's had to die for doing the right thing? No wonder all the good ones die, leaving all the bad ones behind. Also I thought it was just a fictional movie, didn't know it was actually based on a true story... interesting.

Rating: 3/5
Directed by Carl Rinsch
Starring: Keanu Reeves, Hiroyuki Sanada, Kou Shibasaki, Rinko Kikuchi
Genre: American fantasy action film depicting a fictional account of the forty-seven Ronin, a real-life group of Ronin (master-less samurai) in 18th-century Japan who avenged the murder of their master (stories, plays and other dramatic performances of the 47 Ronin story are commonly referred to as Chūshingura in Japan)
Email ThisBlogThis!Share to TwitterShare to FacebookShare to Pinterest
Sections: Movies