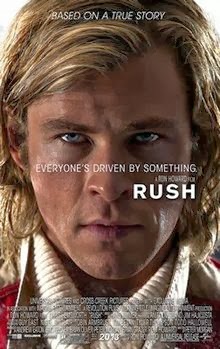 James Hunt and Niki Lauda are two highly skilled race car drivers who first develop a fierce rivalry in 1970 at a Formula Three race at the Crystal Palace circuit in England, when both their cars spin out and Hunt eventually wins the race. Hunt is a brash young Englishman with a tendency to vomit before every race, while the Austrian Lauda is a cool, calculating technical genius who relies on precision. After a falling out with his father, Lauda takes a large bank loan and buys his way into the BRM Formula One team, meeting teammate Clay Regazzoni for the first time. Meanwhile, Hesketh Racing, the fledgling racing team Hunt drives for, enters Formula One as well. Lauda then joins Scuderia Ferrari with Regazzoni and wins his first championship in 1975. Hesketh closes shop after failing to secure a sponsor, but Hunt manages to land a driving position in McLaren after Emerson Fittipaldi leaves the team. During this time, Hunt marries supermodel Suzy Miller, while Lauda develops a relationship with socialite Marlene Knaus.
The 1976 Formula One season starts with Lauda dominating the first two races while Hunt struggles to catch up. Hunt wins the Spanish Grand Prix, but is disqualified after a post-race inspection rules that his car is too wide. Struggling to comply with F1 rules, McLaren suffers a series of setbacks on the next few races, and Hunt's situation is further exacerbated when Suzy is discovered to have a relationship with Richard Burton. Following his divorce, he regains his competitive spirit and his disqualification in Spain is overturned, reinstating the points he lost and putting him back into championship contention. Meanwhile, Lauda marries Marlene in a private ceremony but starts to have concerns about the effects of his marriage on his racing career.
At the German Grand Prix, Lauda urges the F1 committee to cancel the race due to heavy rain on the already notoriously dangerous Nürburgring; the request is vetoed by majority of the racers after Hunt convinces them that Lauda fears losing the points race. Both Hunt and Lauda start the race with rain tires, which becomes a costly tactic due to most of the track quickly drying up. They both pit to change tires during the second lap, but halfway through the third lap, a suspension arm in Lauda's Ferrari breaks, sending the car flying into an embankment before it bursts into flames and is further hit by other cars on the track. After being pulled out of the flaming wreckage, he is airlifted to the hospital with third-degree burns to his head and face and dangerous internal burns to his lungs. For the next six weeks, Lauda is treated for his injuries while he watches his rival dominate the races in his absence. Against his doctor's orders, he returns behind the wheel of his Ferrari at the Italian Grand Prix to finish fourth while Hunt fails to finish the race.


I've always been intrigued by Niki Lauda, even knew his name when I was young many moons ago. I remembered reading about him in the newspapers or watched him on TV. He may not be bothered by the way he looks but I've always applauded him for being so brave. I mean many would have shied away from the camera, hid in the house but not him. Truly a professional and talented driver... just retired too early. A really good biographical movie depicting his life during his great moments. Now I do understand his decisions better.