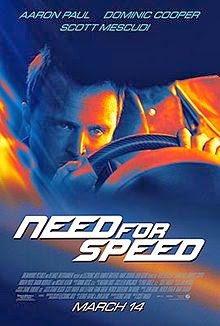 Tobey Marshall is a former race car driver who owns an upstate New York garage, where he and his friends tune performance cars. Struggling to make ends meet, he and his crew participate in street races after hours. One day, Dino, Tobey's former rival, arrives at his garage with a Shelby Mustang that Carroll Shelby had worked on before his death. Dino wants Tobey and his crew to complete the project in exchange for 25% of the car's estimated selling price of $2 million. Despite objections from the crew, Tobey agrees to the deal.
Upon completion of the project, the Shelby Mustang is put up for auction at a party. Tobey and Dino meet Julia, an Englishwoman who agrees to pay $3 million if the car can go over 230 mph, as Tobey claims. The next morning at a nearby track, Tobey gets the Mustang to reach 234 mph, prompting Julia to purchase it for $2.7 million. Later, Dino challenges Tobey and his partner Little Pete to race his father's three illegally imported Koenigsegg Ageras from his mansion to a bridge over the interstate. If Tobey wins, he gets Dino's 75% of the Mustang deal; if he loses, he gives up his 25%. During the race, Dino tags Little Pete's car, sending it flipping down a ravine before bursting into flames. Dino disappears from the scene, and Tobey is sent to jail for involuntary manslaughter, as there is no evidence pointing to Dino's involvement.
Two years later, Tobey is released on parole and he sets out to avenge Little Pete's death. He is able to borrow the Shelby Mustang he had worked on. Tobey and Julia set to enter the De Leon, a winner-take-all race organized by local DJ Monarch; for this, they have to reach San Francisco before the race starts in two days. The Shelby Mustang causes an interstate chase with police and other racers, as Dino offers his Lamborghini to anyone who can stop Tobey from entering the race. In Utah, the Shelby Mustang is forced off-road by a couple of trucks that surround it by a cliff, but Maverick, a member of Tobey's crew, appears in a helicopter and tows the Shelby Mustang mid-air to the Bonneville Salt Flats, where Tobey's crew awaits them. Tobey and Julia manage to arrive in San Francisco to register for the race, but Julia is hospitalized after a truck driven by one of Dino's henchmen broadsides the Shelby Mustang. Anita, Dino's girlfriend and Little Pete's sister, has become aware of Dino's plans. She searches his computer and discovers the Koenigsegg that killed Little Pete is stored in a local warehouse. Anita gives Tobey the location of the car, as well as her engagement ring from Dino.
The above taken from Wikipedia.

What can I say? I was on my toes from start to end, fully entertained and really loved those cars!!! The plots may be a little predictable (most movies are nowadays) and I didn't like some of the camera's handling (should use the tram and not run with the actors), other than that, it was a superb movie! The actions were realistic, the casts were so into it and man... those cars can really speed! When the Koenigsegg flipped with Pete in it, my heart totally stopped! OMG! That poor car burst into flames! Whoever claimed it's not a good movie, you really need to get your brains checked. Hey it's just an action movie and it's supposed to entertain us, not a reality o.O