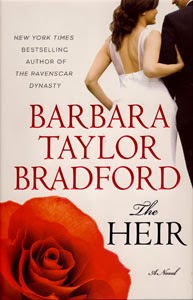 At the age of thirty-three, Edward Deravenel, having survived harrowing years of betrayal, threats from ruthless enemies, countless lovers, and a war that ravaged his country, is finally king of his company. It’s 1918, an influenza pandemic is sweeping the country, and Edward has a family and a business to protect. He must thread his way between his loyal brother, Richard, and his treacherous middle brother, George, an alcoholic bent on self-destruction... but not before he tries to ruin Edward and his good name. Meanwhile, the wrath of his ever-jealous wife, Elizabeth, is reaching a boiling point as suspicions about Edward’s relationships with other women arise.

Politics of inheritance are intense, and different family factions vie for honor over the years. An heir is needed to keep the Deravenel name alive, but tragedy and death remain obstacles at every turn. The choices include a loyal caretaker, a jealous rumormonger, a charming young woman, a sickly boy, and the scion of the family Edward ousted from power years before.

Barbara Taylor Bradford triumphs once again with a novel about passion, treachery, marriage, and family, and the compromises we’re forced to make for power and love.

The above taken from http://www.barbarataylorbradford.com/theheir.htm


This is actually a trilogy but being a good author, she continued where she left off with good explanations so I didn't feel lost. A confession... I didn't know of the 1st and last book so... *angelic innocent* Anyway, I find it to be lengthy at the start but rushed towards the end. It's like she wants the ending to wrap up quick with closure of this dynasty. But then there's a 3rd book so why the rush? I totally loved the moment when Edward finally realized he does love Elizabeth and will not divorced her even though he does love his mistress, Jane. A stoic dynasty filled with mysterious death, love, passion and hatred.