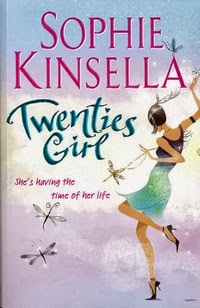 Lara Lington has always had an overactive imagination, but suddenly that imagination seems to be in overdrive. Normal professional twenty-something young women don’t get visited by ghosts. Or do they?
When the spirit of Lara’s great-aunt Sadie—a feisty, demanding girl with firm ideas about fashion, love, and the right way to dance—mysteriously appears, she has one request: Lara must find a missing necklace that had been in Sadie’s possession for more than seventy-five years, because Sadie cannot rest without it.
Lara and Sadie make a hilarious sparring duo, and at first it seems as though they have nothing in common. But as the mission to find Sadie’s necklace leads to intrigue and a new romance for Lara, these very different “twenties” girls learn some surprising truths from and about each other. Written with all the irrepressible charm and humor that have made Sophie Kinsella’s books beloved by millions, Twenties Girl is also a deeply moving testament to the transcendent bonds of friendship and family.
The above taken from Wikipedia.

An honest storyline which started slow but picks up once Ed comes into picture. Filled with many emotional roller-coasters, it somehow reflects on humanity nowadays especially when it comes to the elderly. It’s funny, hilarious to bits but the ending, although expected but I can’t help feeling vulnerable when Sadie had to leave *sob sob* A totally good read which I've enjoyed tremendously.