MPOV: Now You See Me 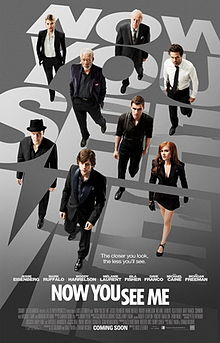 Four gifted magicians—J. Daniel Atlas, Henley Reeves, Jack Wilder, and Merritt McKinney—are brought together by a mysterious benefactor, and, one year later, they perform in Las Vegas as "The Four Horsemen" sponsored by insurance magnate Arthur Tressler. For the finale of their performances, the Four Horsemen invite a member of the audience to help them in their next trick: robbing a bank. The man is apparently teleported to a bank in Paris, where he activates an air-duct which vacuums up the money and showers it onto the crowd in Las Vegas.

FBI agent Dylan Rhodes is called to investigate the theft and is partnered with Interpol agent Alma Dray. They interrogate the Four Horsemen, but release them when no explanation for the theft can be found other than magic. Rhodes then meets Thaddeus Bradley, an ex-magician who makes money by revealing the secrets behind other magicians' tricks. Bradley was in the audience and deduced that the Four Horsemen stole the money weeks before, and manipulated the audience into believing it happened in real time.

Rhodes, Dray, and Bradley attend the Four Horsemen's next performance in New Orleans. The group's finale involves them stealing roughly $140 million from Tressler's bank account and distributing it to the audience, which comprises people whose insurance claims had been denied or reduced by Tressler's company. Rhodes attempts to arrest the Four Horsemen, but they escape with help from audience members who were hypnotized to tackle whoever next yelled "Freeze". An infuriated Tressler hires Bradley to expose and humiliate the Four Horsemen in their next performance. Later, while researching the Four Horsemen's background, Dray learns about rumors of a secret society of magicians called "The Eye" (named after the eye of Horus) and suggests to a skeptical Rhodes the case might be connected to a magician whom Bradley once exposed, and was so humiliated that he attempted a dangerous underwater stunt and drowned.

The above taken from Wikipedia

When I first saw the trailer, I was hooked. When I finally watched the movie, totally no regrets. Loved the way the storyline flows, good and creative plots, totally entertained. The best part was the ending was totally unexpected! Honestly worth watching this movie... heard the sequel is coming in 2015, can't wait for it!