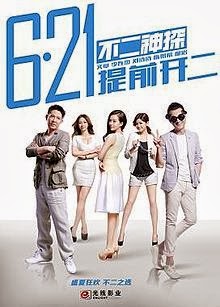 In just 3 days, three cases of Smiling Murder shock Hong Kong. As he looks into the homicide, the young detective Wang Bu Er (Wen Zhang), the police station's reckless buffoon, makes a shocking statement that this is a serial murder.

He and his buddy Huang Fei Hong (Jet Li) embarks on an investigation full of excitement and unexpected events. Huang may appear to be no less muddle-headed than Wang, but in reality, he is the real master of kung fu, and would, without fail, at the most crucial moments, help Wang get out of sticky situations.
Wang initially believes that budding actress Liu Jin Shui (Liu Shishi) is the prime suspect, but later, she is found to be innocent. Next, he shifts his focus on her sister Dai Yiyi (Ada Liu), among others. Eventually, Wang decides to pose as Liui's boyfriend to lure out the murderer. The closer he gets to the truth, the greater the danger he is in.
The above taken from Wikipedia.
One of the reasons I don't watch many Chinese movies, it's ridiculous, meaningless and clueless. It may be laughable at some point but in the end, I don't know what I've been watching. Honestly, I do not understand why the quality has deteriorated... unlike those days where storyline makes sense and actions were realistic. Passable if you have totally nothing to watch or do.
Rating: 3/10
Directed by: Wong Chi Ming
Starring: Jet Li, Wen Zhang, Collin Chou, Michelle Chen
Category: action, comedy
Email ThisBlogThis!Share to TwitterShare to FacebookShare to Pinterest
Sections: Movies