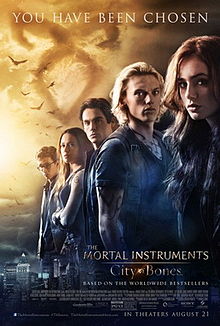 In New York City, teenager Clary Fray (Lily Collins) begins seeing strange symbols, concerning her mother Jocelyn Fray (Lena Headey) and her mother's friend Luke Garroway (Aidan Turner). Later, while attending a nightclub with her friend Simon Lewis (Robert Sheehan), Clary witnesses a man being murdered by Jace Wayland (Jamie Campbell Bower), whom only Clary appears to see. Meanwhile, Jocelyn is abducted by two men, Emil Pangborn (Kevin Durand) and Samuel Blackwell (Robert Maillet), and leaves a message for Clary warning her that someone named Valentine is coming after her. Returning home, Clary is attacked by a demon and rescued by Jace, who reveals himself to be a Shadowhunter, a warrior trained to slay demons hidden on Earth, such as the man in the nightclub. Jocelyn was a Shadowhunter as well, and Clary has inherited her powers, including the ability to read runes.

Clary and Jace visit Clary's neighbor and friend, Madame Dorothea (C. C. H. Pounder), a witch who reveals that Pangborn and Blackwell are after the Mortal Cup, one of the three Mortal Instruments given to the first Shadowhunter by the Angel Raziel, that allows humans to become half-Angel. Simon, now able see Jace, joins them as they leave to meet Luke in his bookstore. There, Luke is being interrogated by Pangborn and Blackwell, and reveals that he is after the Mortal Cup himself. The trio then escapes to the Shadowhunters' base of operations, the Institute, where Clary and Simon meet Jace's fellow Shadowhunters, Alec Lightwood (Kevin Zegers) and Isabelle Lightwood (Jemima West), and their leader, Hodge Starkweather (Jared Harris), who reveals that Pangborn and Blackwell are working for Valentine Morgenstern (Jonathan Rhys Meyers), a ex-Shadowhunter who betrayed the group and sought to steal the Mortal Cup for himself in order to gain control of Shadowhunters and demons alike.

Believing the key to find the Mortal Cup lies within Clary's mind, Starkweather instructs Jace to take Clary to the City of Bones, where fallen Shadowhunters are laid to rest, to meet Brother Jeremiah (Stephen R. Hart), a dead Shadowhunter that probes Clary's mind and learns of her connection to a powerful sorcerer, Magnus Bane (Godfrey Gao). Clary, Jace, Simon, Alec and Isabelle meet Bane in a nightclub, where he reveals that Jocelyn hired him to block knowledge of the Shadowhunters from Clary's mind. Their conversation is interrupted when Simon is kidnapped by vampires, leading to a confrontation in a nearby hotel, in which the group is nearly killed before werewolves that hold a truce with the Shadowhunters intervene and save them.

I've been anticipating this movie for a while after watching it's enthralling trailer. Luckily, after watching the movie, I'm looking forward to the next one, City of Ashes, in 2014. I guess I might start reading the books instead since it's apparently more saleable than the movie. Honestly surprised that it's a flop in some countries, perhaps their expectations were really high and unattainable. It was entertaining, action-packed and realistically enough for me with a unique storyline, including the cool CGIs. However, I found Jamie to be a little unnatural at times... especially the love scenes with Lily... which did bothered me at times unlike the natural bond between Lily and Robert. Hope they fare better in City of Ashes.