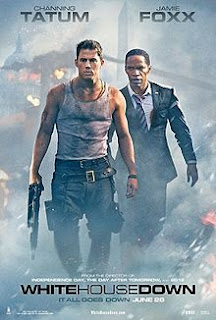 John Cale (Channing Tatum) is a U.S. Capitol Police officer assigned to Speaker of the House Eli Raphelson (Richard Jenkins) after Cale saved Raphelson's nephew's life during a tour in Afghanistan. Cale is struggling to develop a better relationship with his daughter Emily (Joey King), who has a strong enthusiasm for politics. He hopes to impress her by getting a job with the Secret Service, but his hopes are dashed when the interview is conducted by Carol Finnerty (Maggie Gyllenhaal), a former college acquaintance of his who believes him to be unqualified due to a lack of respect for authority and follow-through. After lying to Emily about the outcome of the interview, she and Cale join a tour of the White House.

Meanwhile, a bomb is detonated at the center of the U.S. Capitol building, killing scores of innocents when a mercenary disguised as a janitor threw a bomb into a cart as he rolled and then abandoned in the center of rotunda before detonating. Raphelson, who was in the Capitol, remains unharmed and is taken to an underground command center with Finnerty while Vice President Alvin Hammond (Michael Murphy) is taken aboard Air Force One. The White House is put on lockdown separating Cale from Emily (who had left the tour group to use the restroom). Meanwhile, disguised mercenaries led by Emil Stenz (Jason Clarke), start killing off most of the Secret Service and take the tour group hostage, but Cale manages to take a gun and escapes a mercenary named Killick (Kevin Rankin) to go find his daughter. Following protocol, retiring Head of the Presidential Detail Martin Walker (James Woods) escorts Sawyer and his detail to the Presidential Emergency Operations Center. Once Sawyer gains access, Walker kills Sawyer's detail, revealing himself to be the real leader and his desire for revenge over his son who was killed in a botched black ops mission. Cale, who fails to find Emily, kills a mercenary and takes his gun and radio. Using the radio, Cale locates and rescues President Sawyer.

I was surprised when this movie came onboard. Well, basically we had Olympus Has Fallen and suddenly this movie appeared. It’s like Hollywood has ran out of ideas and White House being attacked seemed fun, I guess. Well, fortunately, this is a much better take than Olympus and I enjoyed this much, much more. It’s more realistic, with more pizzazz and also more action plots as a team rather than a one-man hero. Really worthwhile and Channing Tatum is definitely a plus point. Of course the plot is predictable at some points but the casts, especially Channing and Jamie made us overlooked it with their superb acting.