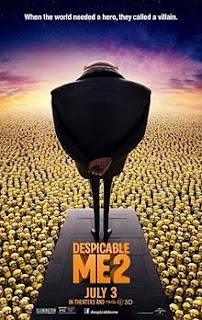 The movie started with a huge magnet suddenly appearing, zapping everything metal, including a metallic laboratory which was located in the middle of nowhere.

Meanwhile, Gru was busy with his 3 girls when an Anti-Villain League (AVL) agent, Lucy, turned up and kidnapped Gru to her HQ. AVL suspected something amiss when the metallic laboratory was stolen as it was making PX-41, a mutating chemical. They decided to get Gru's, with his extensive villain experience, assistance to nab the culprit who stole the lab. Unfortunately, Gru decided not to help them at first as he has turned over a new leaf, making jams and jellies. Before leaving, Lucy tried to persuade Gru again, giving him her name card in case he changed his mind.

After returning to his factory, Gru checked his jam's progress and realized it was a failure as it tasted horribly. Dr Nefario, his scientist, has also decided to leave as he preferred the villain life as opposed to making jam and jellies. In the end, after releasing Dr Nefario, Gru decided to help AVL.

The above poster taken from Wikipedia.

Finally, so excited to watch this! It was slapstick funny and still humanely exciting! Unfortunately, in my honest opinion, the Minions have stolen Gru's thunder! I felt it should be balanced between Gru and Minions and not lopsided.