Finally on the last day, filled with packing and cleaning since aunt was also leaving the bungalow to move to a hotel on Gurney Drive. As the bungalow was too secluded, it's in their best interest that they stay in a hotel for convenience sake. They can also enjoy the remaining days relaxing by the beach.

However, a bad turn of event blown everything out of proportion that morning which left my family scarred permanently. Something I can't write here without being misunderstood. Turned a jovial morning to a sombre one, leaving relatives and friends feeling awkward.

Anyway, aunt made some wonderful special trifles so we had some before leaving. I had never eaten a single scoop of trifle before so I was a little skeptical as it was abundance with fruits! I was worried it will be sourish! Lo and behold, it was yummylicious to the last bite! She made 2 versions, 1 for the kids and 1 for the adults (with a dash of alcohol *grinning*). Of course, I preferred the adult version ^.^ 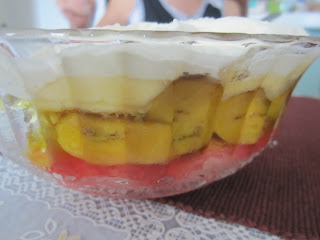 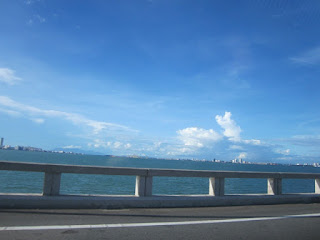 Leaving Penang with a heavy heart as I was not willing to join the real world the next day, having to go to work. Well, I have not rested for many months, only during Public Holidays which were scarce hence I was really looking forward to this. The only sad part was hubby couldn't join us... sigh!

Overall, I was glad to have met my cousin, Philippa (Auntie Jo's daughter), whom I've not met until now. Also, getting to bond with Auntie Jo and the rest of the Lee clans were a major plus point... knowing them better and all. I'm not good with keeping in touch so this gathering does help with the bonding, besides relying on social media platforms like Facebook. Well, hoping for a similar gathering the next round... with hubby able to join us without anyone else disrupting his annual leave and spoiling our plans!

The end.
Email ThisBlogThis!Share to TwitterShare to FacebookShare to Pinterest
Sections: Family, Travels