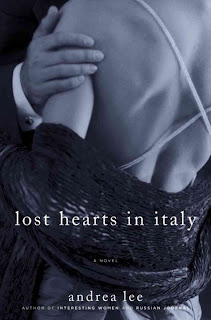 The Italian phrase Mai due senza tre–“never two without three”–forms the basis of Andrea Lee’s spellbinding novel of betrayal. Sophisticated and richly told, Lost Hearts in Italy reveals a trio caught in the grip of desire, deception, and remorse.When Mira Ward, an American, relocates to Rome with her husband, Nick, she looks forward to a time of exploration and awakening. Young, beautiful, and in love, Mira is on the verge of a writing career, and giddy with the prospect of living abroad.On the trip over, Mira meets Zenin, an older Italian billionaire, who intrigues Mira with his coolness and worldly mystique. A few weeks later, feeling idle and adrift in her new life, Mira agrees to a seemingly innocent lunch with Zenin and is soon catapulted into an intense affair, which moves beyond her control more quickly than she intends. Her job as a travel writer allows clandestine trysts and opulent getaways with Zenin to Paris, Monte Carlo, London, and Venice, and over the next few years, now the mother of a baby daughter, she struggles between resisting and relenting to this man who has such a hold on her. As her marriage erodes, so too does Mira’s sense of self, until she no longer resembles the free spirit she was on her arrival in theEternal City. Years later, Mira and Nick, now divorced and remarried to others, look back in an attempt to understand their history, while a detached Zenin assesses his own life and his role in the unlikely love triangle. Each recounts the past, aided by those witness to their failure and fallout.An elegant, raw, and emotionally charged read, Lost Hearts in Italy is a classic coming-of-age story in which cultures collide, innocence dissolves, and those we know most intimately remain foreign to us.

The above taken from www.amazon.com

Uniquely written, I was a little confused at the start but got the hang of it after a few chapters. Some may find it distracting but it was interesting the way the author relates the story from the past and present. She was also detailed and able to recount every single chapters methodically. I soon enjoyed the novel, loved how she detailed Mira's encounter with Zenin, how Nick's transformation from a loving husband to a grudge wielding ex and how Zenin treated differently his lovers and only son. I was hooked on it from the start to the end. Also got me intrigued about Italy, hoping to be able to visit it in the near future. A pleasant read with a different writing tact which was uniquely Andrea's.