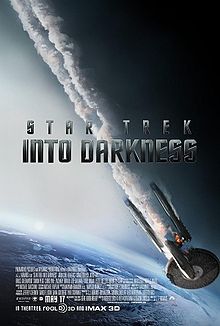 At the start of the movie, on Planet Nibiru, a group of local Aborigines were chasing Kirk and Bones whilst Uhura and Sulu were trying to drop Spock from the jumper into the heart of an active volcano which could erupt anytime and wipe out the entire civilization. Spock was supposed to 'freeze' the volcano from erupting. Unfortunately, the cable snapped and Spock was stuck in the volcano. Once they were back on the Enterprise, which has been embedded in the middle of the sea to avoid being detected or seen by the Aborigines, they learn of Spock's predicament. As there was less chance to beam Spock up due to the distance, Kirk defied protocol and exposed the Enterprise to rescue Spock.

Once back on Earth, Kirk has been demoted to First Officer due to his 'recklessness' which could have been avoided if Spock has not filed the real report. Pike resumed taking over Enterprise as Captain. There was an emergency meeting at Starfleet HQ for all high ranking officers due to a sudden bombing at Section 31. However they were suddenly shot at from a helicopter handled by John Harrison, a Starfleet officer, suspected of bombing Section 31 too. Kirk managed to damage the helicopter and stopped the shooting but Harrison survived by beaming away. Unfortunately Pike did not survived, leaving Kirk and Spock devastated. This is the beginning of the hunt for Harrison and an unforgettable journey which the Enterprise will embark on. 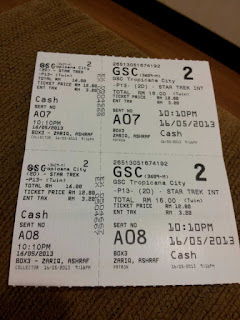 Finally... yes, I'm a Trekkie fan... I have been a fan since young! I remembered watching those series, chasing every single episodes of TNG, Deep Space Nine and Voyager! I have always harboured this dream too where I am a part of their expedition, meeting different species, venturing on different planets. Of course, when all these finally do happen, I would have 'left' Earth *wide grin*. The whole movie was intense, storyline was a tad predictable at times but smooth enough to be overlooked. Honestly, it kept me gripping on my toes, I mean seat, focused with so much emotions flowing through me! I loved and enjoyed e v e r y single minute especially with the wonderful CGI and also superb sound system in the cinema. A movie not to be missed!