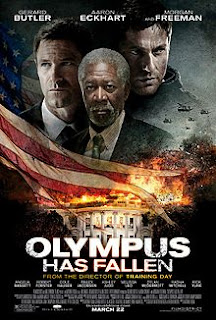 Eighteen months later, Banning works at the Treasury Department, within eyesight of the White House; he has been demoted from the Presidential Detail as he triggers Asher's memories of the night Margaret died. During a meeting between Asher and the prime minister of South Korea, Korean-led guerrilla forces, aided by treasonous members of the prime minister's own detail, which include Dave Forbes (Dylan McDermott), an ex-US Secret Service agent turned private contractor, mount an air and ground assault that results in the capture of the White House. Asher and several top officials are held hostage in the White House bunker, where the prime minister is killed. Before he is killed, Agent Roma (Cole Hauser) alerts head of Secret Service Lynne Jacobs (Angela Bassett) that "Olympus has fallen."

The attack has been masterminded by Kang Yeonsak (Rick Yune), an ex-North Korean terrorist who appears to be motivated by hope for a reunification of Korea. Kang seeks to use Asher's hostage status as leverage to force the U.S. military to withdraw from the Korean Peninsula, allowing the civil war to end. He also seeks to detonate all of America's nuclear weapons in their silos and destroy the country as revenge for the death of his parents. To accomplish this, he requires the access codes to a system in the bunker called Cerberus, which are held by three top government officials within the bunker, including the President. Asher orders the other two officials to reveal their codes to save their lives, certain that he will not give up his code.

An intense movie, keeping me on my toes from start to end. Totally unexpected and damn good! By the time the movie ended, it felt like a ton of weight has been lifted off my chest! LOL! Gerard Butler was at his best element and some may say it's not logical enough but the flow of the story makes it real!