MPOV: Echoes in the mist 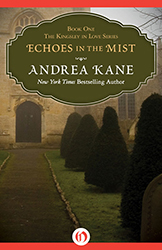 Trenton Kingsley, the embittered Duke of Broddington, has dreamt of the day that he would avenge his beloved father's death. Returning suddenly form self-imposed exile on the Isle of Wight, he takes aim at the man he holds responsible...the unscrupulous Baxter Caldwell, Viscount Winsham. In a masterstroke of irony, he forces the viscount's hand and walks away with his most precious possession...his innocent sister, Ariana.

Ariana Caldwell has grown up in the shadow of a secret family tragedy, at the heart of which lay Trenton Kingsley. Forced to marry a man she had been led to hate-and fear-Ariana is helplessly caught in the renewed fury of an ancient feud. But despite the danger, her husband's unaccountable torment only draws Ariana closer, and her instincts will not allow her to retreat. Caught between Trenton's brooding desire and her brother's imperious demands, Ariana is on an odyssey for the truth...consumed by the promise of a passionate, overwhelming love.

The above taken from http://www.andreakane.com/titlepage.php?ISBN=0671755331
I have not read Andrea's books in ages! This is the first after many years and thankfully, she has not let me down. It's an interesting historical read albeit the mild, standard storyline with the right momentum keeping me entertained.