MPOV: The Story of O 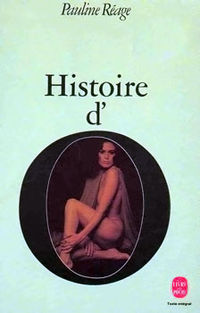 Desclos did not reveal herself as the author for forty years after the initial publication. Desclos claims she wrote the novel as a series of love letters to her lover Jean Paulhan, who had admired the work of the Marquis de Sade.

Plot:
At the beginning of the story, O's lover, René, brings her to the château of Roissy, where she is trained to serve the men of an elite group. After this first period of training is finished, as a demonstration of their bond and his generosity, René hands O to Sir Stephen, a more dominant master. René wants O to learn to serve someone whom she does not love, and someone who does not love her. Over the course of this training, O falls in love with Sir Stephen and believes him to be in love with her as well. While her vain friend and lover, Jacqueline, is repulsed by O's chains and scars, O herself is proud of her condition as a willing slave. During the summer, Sir Stephen decides to move O to Samois, an old mansion solely inhabited by women for advanced training and body modifications related to submission. There she agrees to receive a branding and a labia piercing with rings marked with Sir Stephen's initials and insignia. At the climax, O appears as a slave, nude but for an owl-like mask, before a large party of guests who treat her solely as an object.

TBH, I was initially curious on the level of erotica as this book was banned in many countries. Furthermore, it was written in the 50’s so curiosity got the better of me. Finally, after reading it through e-book, I found it to be disgusting, aghast as to how dominant men treated women even in the 50’s! Yes, it is fiction but this could only mean that extreme dom & sub did happened way back then, even if in a minority! The extent of  such dominance was too much for me. How O willingly submits was so degrading to women kind! Especially the branding and labia piercing! For crying out loud, she's a human and not an animal! She was a total shame but she felt proud instead, at being whipped and prostituted! Felt so appalled after reading it… damn speechless!