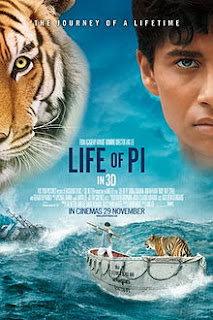 A novelist has come to talk to Pi Patel, a middle-aged Indian immigrant living in Canada. Pi's parents named him Piscine Molitor after a swimming pool in France. As a child he changed his name to "Pi" (the mathematical symbol, π) because he was tired of being called "Pissing Patel". In flashback it was seen that his family owned a zoo, and Pi took great interest in the animals, especially a Bengal tiger named Richard Parker. When Pi tries to feed the tiger in great curiousity, his father runs in and angrily tells him that the tiger is dangerous and not like a human. He forces Pi to witness the tiger killing a goat to prove his point. Pi is raised Hindu and vegetarian, but at 12 years old, he is introduced to Christianity and then Islam, and starts to follow all three religions as he "just wants to love God."

When Pi is 16, his father decides to move the family to Winnipeg, Canada, where he intends to settle and sell the zoo animals. They book passage on a Japanese freighter named Tzimtzum. One night there is a storm; the ship begins to founder while Pi is on deck. He tries to find his family, but a crew member throws him into a lifeboat. Pi watches helplessly as the ship sinks, killing his family and the crew. After the storm, Pi finds himself in the lifeboat with an injured zebra, and is joined by an orangutan. A spotted hyena emerges from the tarp covering half of the boat, and kills the zebra and then the orangutan. Suddenly the tiger Richard Parker emerges from under the tarp, killing the hyena.

Pi gets out biscuits, water rations, and a hand axe. He builds a small raft and stays at a safe distance from the tiger. Pi begins fishing and is able to feed the tiger. He also collects rain water for both to drink. When the tiger jumps off to hunt fish, at first Pi wants to let it drown, then he relents and helps it climb back into the boat. After many days at sea, Pi trains the tiger to accept him in the boat. He also realizes that caring for the tiger is keeping him alive. Weeks later and half dead, they reach a floating island. Both Pi and Richard Parker eat and drink freely and regain strength. But at night the island transforms into a hostile environment: the fresh water turns acidic, the resident meerkats sleep in the trees, the plants are carnivorous. Pi discovers the island's secrets when he finds a human tooth. Pi and the tiger leave.