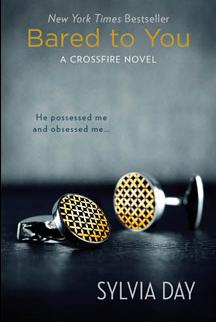 Bared to You centers on Eva Tramell, a twenty-four-year-old woman who is a survivor of childhood sexual abuse. Eva finds it difficult at times to overcome this past, but is intensely drawn to young billionaire Gideon Cross as soon as she meets him. It is later revealed that Gideon is also a childhood sexual abuse survivor. The two must find a way to heal each other in order to move on from their pasts and establish a healthy, functional romantic relationship.

Similarities to Fifty Shades of Grey:
News sources have commented on the similarity between Bared to You and Fifty Shades of Grey, with the Daily Beast remarking that Berkley marketed the book as a "Fifty Shades clone, down to its gray book jacket featuring a pair of cuff links and the tagline: “He possessed me and obsessed me." Day has commented on the similarities, saying that she had been inspired to write the book based on her earlier Seven Years to Sin, but acknowledged that the popularity of Fifty Shades of Grey helped drive sales. She further commented that the idea of "'the tortured millionaire hero' is a romance staple that has been around for decades"

TBH, this book is like a replica of Fifty Shades of Grey. While reading, I can’t help but compare it especially the characters:
Master of the universe = dark and dangerous
Christian Grey, owns most of Seattle = Gideon Cross, owns most of Manhattan
Anastasia Steel, fresh grad = Eva Tramell, fresh grad
Mrs Robinson aka Elena = Magdalene Perez
Katherine Kavanaugh, BFF = Cory Taylor, BFF
And so on… even the initial storyline has some similarities but thank goodness as the story prolongs, Sylvia tried to sway it her way a little. Fortunately for Fifty Shades, the erotic scenes in Bared to You were not as creative and exciting. Even the romance was not as realistic and kinda fake i.e. suddenly from lust, Eva apparently fell in love. Also concentrated too much on the esthetics of Gideon which made it lull. I don’t feel/ embrace the story as much as I did in Fifty Shades trilogy. I guess it’s the way Sylvia had written it, made it sounded a little rush and pushed on. Hopefully book 2, Reflected in You, takes a different approach.