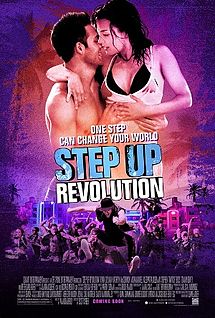 The Mob sets the dancing against the vibrant backdrop of Miami. Emily arrives in Miami with aspirations of becoming a professional dancer and soon falls in love with Sean, a young man who leads a dance crew in elaborate, cutting-edge flash mobs, called "The Mob". When Emily's wealthy father threatens to develop The Mob's historic neighborhood and displace thousands-of people, Emily must work together with Sean and The Mob to turn their performance art into protest art, and risk losing their dreams to fight for a greater cause.

This movie was over-rated as I had very high expectation while watching it. Unfortunately, too high that I was left disappointed. The storyline was kinda lame and predictable. The only plus points were the superb choreography/ dance skills! Beautiful, mind-blowing and entertaining! In the end, I prefer Step Up 3 instead.