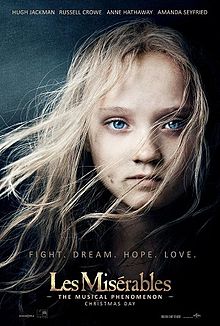 In 1815, convict Jean Valjean (Hugh Jackman) is released on parole by prison guard Javert (Russell Crowe) after serving a nineteen-year sentence. He is offered food and shelter by the Bishop of Digne (Colm Wilkinson), but steals his silver during the night. He is caught by the authorities, but the Bishop says that the silver was given as a gift, and secures Valjean's release. Touched by the Bishop's generosity, Valjean breaks his parole and vows to start an honest life under a new identity. Javert swears he will bring the escaped convict to justice.

Eight years later, Valjean has become a factory owner and mayor of Montreuil-sur-Mer. Fantine (Anne Hathaway), one of his workers, is discovered to be sending money to her illegitimate daughter, Cosette (Isabelle Allen), who lives with the unscrupulous Thénardiers (Sacha Baron Cohen and Helena Bonham Carter) and their daughter Éponine (Natalya Wallace), and is dismissed by the foreman (Michael Jibson). In a desperate attempt to support her daughter, Fantine becomes a prostitute. She is arrested by Javert after she attacks an abusive man, but is saved by Valjean, who has her hospitalized. Later, Valjean learns that a man believed to be him has been arrested. Unable to condemn an innocent man, Valjean reveals his identity to the court before departing for the hospital. There he promises a dying Fantine that he will look after her daughter. After escaping from Javert, Valjean finds Cosette and pays the Thénardiers to allow him to take her, and promises to be like a father to her.
Nine years later, Jean Maximilien Lamarque, the only government official sympathetic toward the poor, is nearing death. Students Marius Pontmercy (Eddie Redmayne) and Enjolras (Aaron Tveit), together with street urchin Gavroche (Daniel Huttlestone), discuss revolution. Marius later catches a glimpse of Cosette (Amanda Seyfried), now a young woman, and instantly falls in love with her. Meanwhile, despite Cosette's questioning, Valjean refuses to tell her about his past or her mother.
At a café, Enjolras organises a group of idealistic students as Lamarque's death is announced. Meanwhile, Éponine (Samantha Barks), now Marius's friend, leads him to Cosette, where the two profess their love for one another. Lamenting that her secret love for Marius will never be reciprocated, Éponine fatalistically decides to join the revolution. Later, an attempted robbery of Valjean's house makes him mistakenly believe that Javert has discovered him, and he flees with Cosette. As they leave, Enjolras rallies the Parisians to revolt, and Marius sends a farewell letter to Cosette. The next day, the students interrupt Lamarque's funeral procession and begin their revolt. Javert poses as a rebel in order to spy on them, but is quickly exposed by Gavroche and captured. During the ensuing gunfight, Éponine saves Marius at the cost of her own life, professing her love to him before she dies. Valjean, intercepting the letter from Marius to Cosette, goes to the barricade to protect Marius. After saving Enjolras from snipers, he is allowed to execute Javert. However, when the two are alone, Valjean frees Javert, telling him to run.
With the Parisians not joining the revolution as the students expected, they resolve to fight to the death. Everyone is killed but Marius, who is saved when Valjean drags his unconscious body into the sewers. Thénardier, scavenging the dead bodies, steals Marius's ring. Valjean recovers and escapes the sewers carrying Marius, but is confronted at the exit by Javert. Javert threatens to shoot Valjean if he refuses to surrender, but Valjean ignores him. Unable to reconcile the conflict between his civil and moral duties, two things which he always considered the same, Javert commits suicide.
Later, Marius mourns for his friends but Cosette comforts him. Revealing his past to Marius, Valjean tells him he must leave because his presence endangers Cosette, and makes Marius promise never to tell her. Marius and Cosette marry; the Thénardiers crash the reception and testify that they saw Valjean carrying a murdered corpse through the sewers. Thénardier unwittingly shows Marius the ring that he stole from him as "proof." Recognising the ring, Marius realises that it was Valjean who saved his life. Being told Valjean's location by Thénardier, Marius and Cosette depart to find him.
As Valjean sits dying in a local convent, he perceives the spirit of Fantine appearing to take him to Heaven. Cosette and Marius rush in to bid farewell. Valjean hands Cosette his confession of his past life, and joins the spirits of Fantine, the Bishop, Enjolras, Éponine, Gavroche, and the other rebels at the barricade.
The above taken from Wikipedia.

Finally! Watching this movie is like a dream come true! Although not used to watching a musical on a big screen,  it was definitely most mesmerizing and felt emotionally attached to it! From start to end, I was enthralled... felt like I'm in the movie... captured in that moment. The casts were superb and so realistic! I did hear some saying acting not real enough and poor singing, well, it's in movie form thus you might experienced it differently as opposed to a real Broadway musical. To me, it was real enough that I kept tearing!!! From Fantine being a hooker to her dying to Cosette leaving Marius to poor Eponine dying for Marius and a lot more! Honestly, I don't mind watching it again and again! *humming 'Do you hear the people sing? Singing the song of angry men'*
Rating: 10/10
Email ThisBlogThis!Share to TwitterShare to FacebookShare to Pinterest
Sections: Movies