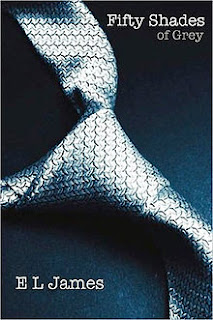 Anastasia Rose Steel's life is about to change upon a chance meeting to interview entrepreneur Christian Grey on behalf of her housemate, Katherine Kavanagh as she's ill. She's nervous as she didn't do a background check and Katherine also didn't provide a profile before this interview. Upon entering his office, Anastasia tripped and fell in front of Christian, causing much embarrassment to herself especially since Christian is so young and handsome! As the interview progresses, the attraction between them became more apparent although Anastasia couldn't grasp it as she believes she's just an ordinary girl and Christian is a handsome, successful businessman who can have any beautiful lady he wants. Katherine thought otherwise as she could hear the mild seduction between them on the interview recording. One day, Christian turns up at Clayton where Anastasia works part-time, on the pretext to buy some DIY. As Katherine's article is still short of a photo, Anastasia took the opportunity to make an appointment for a photo shoot. Christian takes the opportunity to have coffee with her after the photo shoot and slowly but surely the attraction between them became more apparent and kick-started a relationship which both of them did not anticipate.

The above pix was taken from Wikipedia.

I accidentally downloaded this novel in my e-book and deleted it. Yeah, deleted it then regretted my action as I later found out it's quite the rage now. So I downloaded it again, not knowing what to expect as I didn't read the prologue, and this time I read it. Lo and behold, it's a book I couldn't get enough and soon after addicted to it!