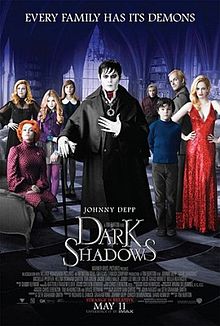 In 1760, the Collins family migrates to America from Liverpool and sets up a fishing port in Maine, naming it Collinsport. Some years later, the son, Barnabas (Johnny Depp), seduces his family's maid, Angelique Bouchard (Eva Green), who is a witch. When he tells her he doesn't love or want her, Angelique kills Barnabas' parents. Barnabas then falls in love with Josette du Pres (Bella Heathcote). In a fit of jealousy, Angelique bewitches Josette into leaping from a cliff to her death. Barnabas leaps after her in grief, but he survives because Angelique turns him into an immortal vampire. She rouses a mob to capture and bury Barnabas alive in a chained coffin in the woods and curses his family.

196 years later, in the year 1972, construction workers accidentally free Barnabas from his coffin, who slakes his two-century hunger by feeding on and killing his rescuers. He makes his way back to his manor to find it inhabited by his dysfunctional descendants and their servants—the family matriarch Elizabeth Collins Stoddard (Michelle Pfeiffer); her brother Roger (Jonny Lee Miller); her 15-year-old daughter Carolyn (Chloë Grace Moretz); Roger's 10-year-old son David (Gulliver McGrath); Dr. Julia Hoffman (Helena Bonham Carter), David's psychiatrist; Willie Loomis (Jackie Earle Haley), the manor's caretaker; and Victoria Winters (Heathcote), David's newly-hired governess and Josette's reincarnation. Upon convincing Elizabeth of his identity by revealing a secret treasure room behind the fireplace, Barnabas is allowed to stay under the condition that he never reveal neither the room nor that he is a vampire to the rest of the family. He must also pretend to be a distant relative from England who has come to restore the family's business and reputation in town. He soon becomes very deeply attracted to Victoria, whom he briefly mistakes for his lost Josette, and immediately begins to pursue her.

As Barnabas helps revitalize the Collins' fishery and manor, he is approached by Angelique, who has used her powers to establish a successful rival fishery called Angel Bay. She tries to win him back, later convincing him to make wild, passionate love with her, but he still rejects her, telling her that he loves Victoria instead. He restores his family's name by inviting the entire town to a party at the manor featuring Alice Cooper, where Victoria reveals to Barnabas that her parents committed her to an insane asylum as a child because she could see and talk to Josette's ghost. They kiss and confess their feelings to each other, unknowingly enraging Angelique who has witnessed the scene. Meanwhile, Dr. Hoffman has discovered Barnabas' true nature after hypnotizing him. She convinces him to try to turn himself back to a regular human via blood transfusions, but her real intent is to use his blood to turn herself into a vampire to avoid aging. Upon discovering this betrayal, Barnabas drains her to death and dumps her body into the ocean. Barnabas catches Roger trying to find the secret room and exposes Roger's lack of interest in his son. Barnabas then gives him a choice of either staying and being a good father to David or leaving the family. Roger chooses to leave, deeply wounding his son's feelings. Soon afterward, Barnabas rescues David from a falling disco ball and stumbles into a beam of sunlight, burning his skin and exposing his secret to the horrified children and Victoria.

A horror comedy which freaks me yet totally hilarious at some point... a balance of the witty and scary which kept me entertained throughout the movie. I normally find Tim Burton's movie quirky yet weird thus this was no exception. An interesting take on a vampire love story which a family can enjoy.