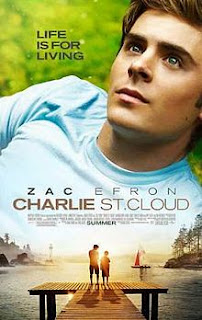 Charlie St. Cloud (Zac Efron) is a sailor who wins a professional boating race on his sailboat, the Splendid Splinter, along with his younger brother Sam (Charlie Tahan). He subsequently receives a sailing scholarship to Stanford University. Charlie graduates from Winslow High School and after getting home from his graduation ceremony, Charlie promises Sam that they will practice baseball together every day until he leaves for Stanford; at sunset when the “Bailey’s Yacht Club” ceremonial cannons sound. Later that night, Charlie was supposed to go to a graduation party with his friends, but his mother Claire (Kim Basinger) makes him babysit Sam while she picks up another shift at her job as a nurse. When Sam is watching television, Charlie tries to sneak out and go to the party. But he is caught by Sam when he turns his headlights on, and Sam asks Charlie to drive him to his friend Tommy's house to watch the Red Sox game. At first Charlie refuses, but gives in when Sam makes compliments about his car. While driving, Charlie and Sam talk about Charlie's departure and horseplay until they get into a bad car accident at an intersection. Their car is rear ended by a SUV, forcing them into the path of a Mack truck in a T-bone collision. In the dark, Charlie hugs a badly wounded Sam and tries to reassure him that everything will be fine once he takes the blame for his actions. Knowing that his injuries are fatal, Sam asks Charlie to never leave him alone again, saying that if he does, they will always be together as brothers. Charlie promises they will always be together. Then a paramedic named Florio Ferrente (Ray Liotta) revives Charlie, who sobs in horror when he realizes that Sam has succumbed to his wounds and died in his arms. At Sam's funeral, a broken-hearted Charlie runs off after refusing to put Sam's baseball glove in the grave. After a heartbroken run through the neighboring woods, Charlie finds Sam's spirit and discovers that Sam can interact with him on the physical plane. After their reunion, Charlie fulfills Sam's dying wish by practicing baseball with him every day at sunset, in the canyon, after the sounding of the cannons.

A relatively emotional drama with superb, noteworthy casts. I was so drawn into the movie even though some of the plots were kinda predictable. I guess I am a sucker for sentimental movies. A great movie to watch with your loved ones, especially those who appreciate family drama.