MPOV: Man on the Ledge 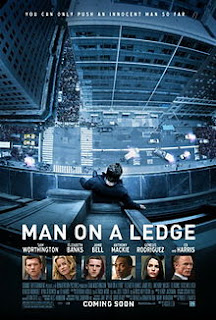 In New York City, Nick Cassidy (Sam Worthington) checks in to the Roosevelt Hotel under the false name of Walker, goes to his hotel room on the 21st floor, and climbs on the ledge, apparently ready to commit suicide. The crowd below sees him and calls the police. They isolate the area, with Dante Marcus (Titus Welliver) controlling the crowd, while Jack Dougherty (Edward Burns) tries to talk with Nick. However, Nick says he will only speak to negotiator Lydia Mercer (Elizabeth Banks), who is on a leave of absence after failing to convince a depressed policeman not to jump from the Brooklyn Bridge a month earlier.
Lydia arrives at the hotel room and manages to acquire Nick's fingerprints from a cigarette they share. Dougherty has them analyzed and discovers that Nick is an ex-policeman who was arrested for stealing a $40 million diamond from businessman David Englander (Ed Harris). Nick was given a 25-year sentence, but after being allowed to attend his father's funeral a week earlier, escaped from his guards. Nick, however, maintains that he is innocent and reveals that Englander used to employ cops to protect his multi-floor jewelry business. One day, while Nick was escorting Englander and the diamond, he was knocked unconscious by two men in ski masks. He awakened to find that Englander had framed him for stealing the diamond in order to get the insurance money, as he lost $30 million with Lehman Brothers and more money when the real estate market crashed.

Unbeknownst to the police, Nick is merely distracting them while his brother Joey (Jamie Bell) and Joey's girlfriend Angie (Génesis Rodríguez) break into Englander's upper floor jewelry vault in the building across the street to steal the diamond and prove Nick's innocence. Meanwhile, Dougherty informs Marcus of Nick's identity, and Marcus orders the security of the jewelry store to check the vault. Although Joey and Angie are able to evade them, they don't find the diamond. They set off the alarms, tricking Englander into retrieving the diamond from another safe that they did not know about, and return to his office, where they ambush him and steal the diamond at gunpoint.

Honestly, the movie started nonchalantly but slowly and surely, it peaked midway and kept me on my toes until the end! Movie was unpredictable with a very creative twist, good plot with fantastic casts! A good movie to watch, sad that I missed watching it in the cinema though.