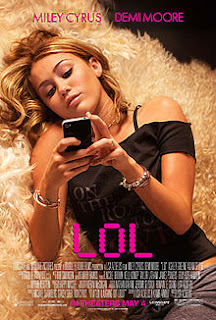 In a world connected by Facebook, Lola Williams and her friends navigate the peer pressures of high school romance and friendship while dodging their sometimes overbearing and confused parents. When Lola's mom, Anne, "accidentally" reads her teenage daughter's racy journal, she realizes just how wide their communication gap has grown.

Lola has an ordinary life, with a boyfriend, Chad. When they return to school, Lola discovers that Chad has cheated on her over the summer. Lola lies about meeting someone else and the two break up. Lola has lifelong friends in Emily and Kyle. Kyle and his band want to compete in the battle of the bands. When Kyle and Lola realize the feelings they have for each other they pursue a relationship. To make matters more complicated with Chad and Kyle being friends and the high school 'post it note' Ashley wants to be with Kyle. When Lola looks for Kyle she is told he is in the bathroom but when she overhears two people in the toilets together she assumes it is Kyle and Ashley from seeing a purse on the floor the same as Ashley's. Lola confronts Ashley who does not deny it. A huge fight breaks out where Lola accuses Kyle of cheating like Chad did. Kyle is astonished that she thinks that this would happen, causing them to break up. Kyle's father dislikes music and feels that Kyle's love for music is in the way of his school work, so he constantly tries to stop him from playing. Lola finds out from Emily that it was her and Wen that were in the toilets and not Kyle and Ashley.

Lola feels betrayed that Emily did not tell her before. Anne lets Lola go to Paris, where all her friends, including Kyle and Emily, will be staying with French families. Lola and Emily stay with a family who worship medieval culture. Kyle tells the family that Lola is his cousin and the two spend the night together. When they all get home, Lola sticks up for Ashley when Chad calls her a ho. Ashley thanks her for this and it seems they could be friends again in the future. Anne finds her diary and finds out Lola has slept with Kyle and done drugs. Later, she tells Lola's father and confronts Lola. Feeling betrayed and angry, Lola moves in with her dad. Eventually, Lola and Anne reconcile and she moves back in with her. Kyle's band wins Battle of the Bands with his father's support. Kyle and Lola stay together and Ashley is with Chad. The film ends with Anne and Lola laughing out loud.

A light family drama but not a good movie though for Asian kids as it depicts teenagers allowed to have sex at a tender age so I wouldn’t encourage this as a movie to watch with the family... unless they are all adults. It’s like a movie to remind me that my kids would be going through such scenarios in the near future *sweat* so back to basic – sex education: a very important tool to mind our kids to not have early sex, unwanted pregnancies, diseases and abortion. I do know a lot of parents shy away from teaching their children sex education which leads to much early, unsafe sex. We must educate our children or we will have to endure the consequences of ignorance. I totally do not agree with unwanted pregnancies where most parents would expect the children to marry, in future it could lead to divorce as they marry too young, furthermore without a firm foundation and job. As such, I am not supporting it but if such unwanted pregnancy happened, these couples should consider abortion where many would disagree with me or hate me for bringing this up. So to avoid all these unnecessary future scenes, it is better to educate our children now, pronto. Btw, back to the movie, the backdrop of Paris is beautiful though ^.^