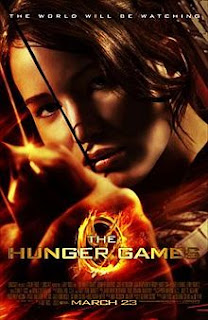 The nation of Panem, formed from a post-apocalyptic North America, consists of a wealthy Capitol and twelve poorer surrounding districts. As a punishment for a previous rebellion against the Capitol by the districts, one boy and one girl between the ages of 12 and 18 from each district are selected by an annual lottery (known as the "Reaping") to participate in the Hunger Games. The participants (or "tributes") of the Hunger Games must fight to the death in an arena controlled by the Capitol until only one remains alive; the victor is rewarded with fame and wealth. Katniss Everdeen, a 16-year-old girl from District 12, volunteers for the 74th Annual Hunger Games, to take the place of her younger sister Primrose, who was selected by the lottery. Peeta Mellark, a baker's son who once gave Katniss bread when her family was starving, was also selected.

Katniss and Peeta are taken to the Capitol, where their drunken mentor, former Games victor Haymitch Abernathy, instructs them to watch and learn the talents of the other tributes, especially the "Careers", who have been trained from birth to compete in the Games. During a pre-Games interview with TV personality Caesar Flickerman, Peeta unexpectedly reveals his love for Katniss. She is initially outraged, believing it to be a ploy to gain audience support, as "sponsors" may provide in-Games gifts of food, medicine, and tools. The Games begin with more than half of the tributes killed on the first day, while Katniss relies on her well-practiced hunting and outdoor skills to survive. Peeta forms an uneasy alliance with the Careers, including Cato, Clove, Marvel, and Glimmer, and with his tracking help they corner Katniss in the woods. Katniss develops a partnership with a District 11 tribute named Rue, when the young girl points out a tracker jacker nest, which Katniss drops on the Careers, killing Glimmer. Rue cares for Katniss as she recovers from tracker jacker poisoning. Katniss decides to destroy the alliance's food stash by triggering the explosives surrounding it. Upon discovering the destroyed food and supplies, Cato breaks the District 3 boy's neck because eveything was destroyed under his watch. Katniss and Rue's partnership ends when Rue is fatally wounded by Marvel, whom Katniss kills in their defense. Katniss stays with Rue as she dies, then spreads flowers over her body as a sign of respect. When this is televised, it sparks a riot in District 11.

With Katniss and Peeta presented to the public as "star-crossed lovers" – and the Gamemakers trying to avoid inciting further riots – a rule change is announced midway through the Games, stating that two tributes from the same district can win the Games as a pair. Upon hearing this, Katniss searches for Peeta and find him suffering from an infected sword wound, a result of a fight with Cato. As Katniss tries to nurse Peeta back to health, she presents herself as deeply in love with him to gain audience favor and sponsorship. When she tries to retrieve medicine for Peeta, Clove attacks her. Thresh, the other District 11 tribute, appears and kills Clove, sparing Katniss in memory of Rue. "Foxface" dies from eating nightlock berries stolen from Peeta, who did not know they were highly poisonous. A pack of vicious hound-like creatures are released, killing Thresh and forcing Katniss and Peeta towards the Cornucopia, where they encounter Cato. After a brutal fight, Katniss wounds Cato with an arrow and Peeta hurls him from the Cornucopia to the creatures. Katniss shoots Cato, to spare him a prolonged death. With Peeta and Katniss apparently victorious together, the Gamemakers suddenly reverse the rule change allowing two victors, setting them up to duel each other to the death. Instead, Katniss takes a cache of nightlock berries and hands half to Peeta. Realizing that their mutual suicide would deprive the public of any victor, the Gamemakers hastily announce them both as victors of the 74th Hunger Games.

I can never understand the hype this movie brings. It is filled with violence especially among children but it is celebrated with might in the movie. So brutal and cruel yet many totally raved the movie. What has the world turned into? It just shows that many of us in this world actually harboured such angst in themselves but are afraid to show them as most of us sane people will shun them. I was shocked and appalled while watching this movie. I just couldn’t focus on the storyline or the acting as the brutality kept clouding my sane mind. I will give credit to the storyteller as she does have a vivid, wild imagination. And also the castings and costumes but other than that, no comment. At first, I thought of getting the trilogy to read but I have changed my mind since after watching this. Sorry if hardcore supporters disagree with me but this is just my humble opinion.