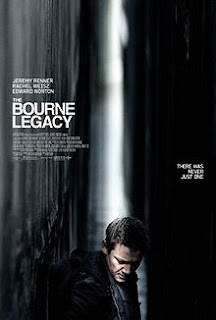 A man swam into the depth of a lake, retrieving a tube. Upon surfacing, he walked to a bon fire in the middle of a snow covered mountain to dry himself. He is Aaron Cross, a member of the Outcome relying on enhancement pills to stay physically fit. Meanwhile, chaos strikes the big apple with Jason Bourne finding ways to reveal the truth behind Blackbriar and Treadstone. Back to the snow covered mountain, after battling the wolves, Aaron finally reached the cabin of another Outcome member, Number 3, hoping to get more supplies of green and blue pills. The blizzard prevented him from leaving immediately thus staying over with Number 3. As he was about to leave the cabin the next day, Aaron heard a distinct sound and immediately ran away. Before he knew it, a missile has blown up the cabin, killing Number 3. Quickly, Aaron ran and also removed the tracking device in his abdomen, knowing that he would be killed if he didn’t. The momentum picked up when Aaron tracked down a doctor who can help him with his pills supply.

I have not watched the Bourne movies before so I was a little surprised this movie is not about Jason Bourne. Which was good as it’s a new chapter by itself, no continuation from the previous trilogy although touching the baseline a little. Jeremy Renner, though not as great as Matt Damon, turned out to be a good choice as Aaron Cross. Really enjoyed the fast pace, action packed episodes but the ending kinda sucked for me. It felt a little rush and ended too soon. Anyway, the first half of the movie actually reminded me of the famous Jack Bauer series, 24, LOL! Most likely there could be another Bourne/ Cross movie :-)