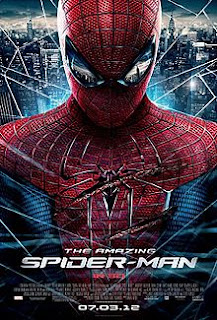 The movie started off with a young Peter playing hide and seek with his father Richard. While looking for his father, Peter discovered the study was broken into and he quickly called for his father. After rummaging for some documents, Richard quickly scooped Peter and told his wife it is time for them to leave. Peter was then placed in the care of his Aunt May and Uncle Ben whilst his parents left and subsequently disappeared.

Moving forward, Peter, all grown up, was being bullied by Flash at school and he has a crush on Gwen Stacy. While helping Uncle Ben cleaning up the flooded basement, Peter found a briefcase belonging to his father. An argument ensued and Peter locked himself in his room while going through the briefcase. Uncle Ben relented and told Peter of what he knew of his parents thus prompting Peter to look for his father’s partner, Dr. Curt Connors, at Oscorp. While sneaking into Oscorp, Peter realized Gwen is actually an intern there and followed her entourage of the lab. He sneaked into a lab filled with genetically modified spiders where one inadvertently tagged along and bite him. Whilst on the way home in the subway, Peter felt strange and realized he has some super power like a spider. This has prompted Peter to dig more into his father’s documents, thus slowly but surely, the beginning of Spider-man.

An interesting take on Spider-man, different from the previous version although some of the elements were still intact. Honestly, this version is more realistic with better fighting/ action sequence and a more likeable Spider-man. Andrew Garfield's agility and acting supersedes Tobey Maguire's. Even Emma Stone is a much better damsel in distress, as compared to Kirsten Dunst. Probably watched too much Spider-man previously as Tyger was a fan then... watched the DVD almost every other day!!! Some may not like this realistic version as they prefer Spider-man without the intelligent gadgets.