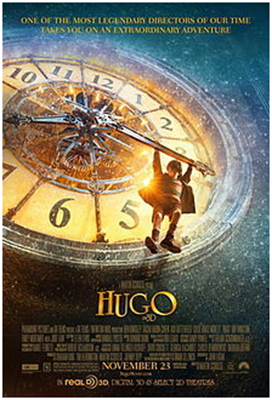 In 1931, Hugo Cabret, a 12-year-old boy, lives with his widowed father, a kind and devoted master clockmaker in Paris. Hugo's father takes him to see films and loves the films of Georges Méliès best of all. Hugo's father is burned alive in a museum fire, and Hugo is taken away by his uncle, an alcoholic watchmaker who is responsible for maintaining the clocks in the railway station Gare Montparnasse. His uncle teaches him to take care of the clocks, then disappears.

Hugo lives between the walls of the station, maintaining the clocks, stealing food and working on his father's most ambitious project: repairing a broken automaton – a mechanical man who is supposed to write with a pen. Convinced that the automaton contains a message from his father, Hugo goes to desperate lengths to fix it. Hugo steals mechanical parts in the station to repair the automaton, but he is caught by a toy store owner named Georges Méliès who takes Hugo's notebook from him, with notes and drawings for fixing the automaton.

To recover the notebook, Hugo follows Méliès to his house and meets Isabelle, a girl close to his age and Georges' goddaughter. She convinces him to go home and promises to help. The next day, Méliès gives some ashes to Hugo, referring to them as the notebook's remains, but Isabelle informs him that the notebook was not burnt. Finally Méliès agrees that Hugo may earn the notebook back by working for him until he pays for all the things he stole from the shop.

Hugo works in the toy shop, and in his time off manages to fix the automaton, but it is still missing one part – a heart–shaped key.

This is a splendidly written movie, beautifully executed and produced; a very memorable drama. I like the pace but be warned, it’s a drama so make sure you had enough sleep before watching it LOL! It’s so cute how movies were made last time! Never knew it was that tedious though. Another superb movie by Martin Scorcese.