Firstly, we had to fetch sis in law, Rosie, from KLIA as she is back from London for a 3 weeks holiday. After breakfast, we headed back to hometown! Angels were excited as we have not been back for more than 2 months due to work and budget *sob* Imagine how much Princess missed us as she even have gifts for us!

I was so touched *sob* Here, she’s wearing the dress I had sewn for her and showing off her new badminton racquets!

Once everyone was ready, we adjourned to sis in law Annie’s for hair cuts and dinner. Finally cut my hair short as the ends were dry and coarse. However, the outcome was not what I had mind *frowning* Anyway, you can see how dry my hair was… 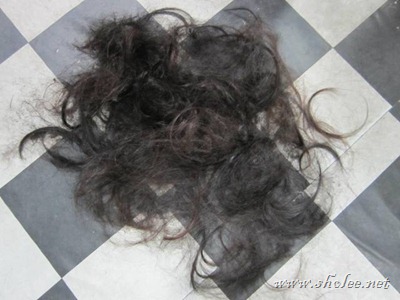 It was totally an uneventful day as Tyger was complaining of headache non-stop. I eventually gave him a Panadol and, whallah, it was cured! Unfortunately, not for long as he was cringing in pain after playing games on the notebook, just before dinner. Sis in law Annie gave him a massage, hoping it would help but it didn’t. He had a sleepless night, cringing in pain, another Panadol also couldn’t helped to ease his pain until the next morning when we quickly sent him to the clinic. 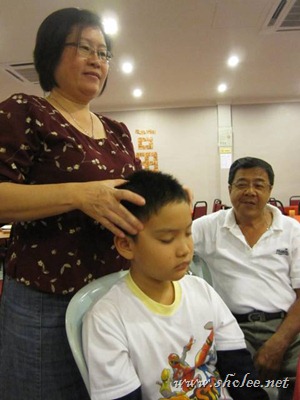 Dr Cheah suspected that his eye-sight has deteriorated after some medical checks. After taking the medications, Tyger felt better and we headed to Kampar for breakfast and pasar pagi (morning market). He was his own self again and talkative *grinning*

I totally loved the food in Kampar! Once in the food court, everything looked delicious! We ordered many varieties to share as sis in law Rosie wanted to taste everything! You can’t find anything as good in London ya…

We went to Tesco Kampar next to feast on ice-creams! Also gotten Tyger’s be-early birthday present, a rubic cube ^.^

On the way back, Tyger felt nauseated and vomited as headache has returned. We were supposed to wait for a few days, as advised by Dr Cheah, before sending Tyger to an optician but Hubby couldn’t wait any longer and went immediately instead. Optician confirmed Dr Cheah’s suspicion but the power was actually minimal and does not require specs. To ease his pain, we had no choice but to get Tyger the specs as optician recommended it based on his situation. So this became another be-early birthday present for Tyger, unintentionally, no cakes though as we were too caught up worrying than celebrating :-p Unfortunately no pix here as it took a few days to make and we had returned to KL then… small town is slower ^.*

True to optician’s words, headache has not returned to haunt Tyger since collecting and wearing the specs. THANK GOODNESS!!!

Happy birthday my love… hoped everything you wished for will come true!!!