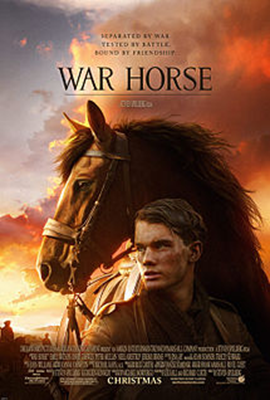 In Devon, England, a boy called Albert Narracott watches the birth of a thoroughbred foal and watches with admiration the growth of the young horse, galloping through the fields at his mother's side. Much to the dismay of his mother, Rose, Albert's father, Ted, buys the colt at auction, despite a friend pointing out a more suitable plough horse for his farm. The desire to spite his landlord, Lyons and then retain his pride, being the apparent motivations for Ted to make higher and higher bids for the colt. The high cost of the horse means he is unable to pay rent to Lyons, who threatens to take possession of the farm if the money is not paid by the autumn. Ted promises to meet the deadline, suggesting he could plough and plant a lower, rock-filled field with turnips. Albert names the horse Joey and devotes much time to training him. Albert's best friend, Andrew Easton, watches as Albert teaches his colt many things, such as to come when he imitates the call of an owl by blowing through his cupped hands.

Ted, who has a bad leg from a war injury, is frequently shown drinking alcohol from a flask he carries. Rose shows Albert his father's medals from the Second Boer War in South Africa, where Ted served as a sergeant with the Imperial Yeomanry. Ted was severely wounded in action, and received the Distinguished Conduct Medal for bravery under fire. She gives Albert his father's regimental pennant, telling Albert that his father is not proud of what he did during the war, and that he had thrown the flag and medals away, though Rose saved and kept them hidden.

Albert trains Joey for the plough and, to his neighbours' astonishment, prepares a stony hillside field to plant with turnips. However a rainstorm destroys the turnip field, so to pay the overdue rent (and without telling Albert), Ted sells Joey to Captain Nicholls, a young cavalry officer, as World War I breaks out. When Albert finds out he confronts the officer and begs for him not to take the horse. Nicholls promises he will take care of Joey as his own horse and hopefully will return him after the war. Albert tries to enlist in the army, but is too young. Before the captain leaves with Joey, Albert ties his father's pennant to Joey's bridle.

At first, I thought that this was another Horse Whisperer kind of movie but I was wrong. Surprisingly directed by Steven Spielberg, it was beautifully acted, storyline was fulfilling with meaningful dramatic moments. This may be another war epic motion picture but totally different especially with the strong and courageous Joey, the hero horse. Totally ♥ Joey!