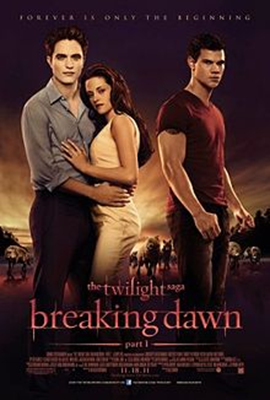 During the reception following her wedding to Edward Cullen, Bella Swan is visited by her friend Jacob Black. When Bella accidentally reveals that she and Edward plan to consummate their marriage during their honeymoon, Jacob tries to attack Edward, but his wolf pack hold him back. He then runs off into the woods, and Edward takes an upset Bella back to the reception.

The couple spend their honeymoon on the Cullens' private Brazilian island. Although hesitant, Edward has sex with Bella for the first time. After Edward realizes that he bruised Bella's arm, back and shoulders during sex, he vows to never be intimate with her again, much to her disappointment; he later gives in to her seductions. Two weeks into their honeymoon, Bella discovers that she is pregnant with the fetus growing at an extraordinarily accelerated rate. After consulting with Carlisle, they rush back to Forks. Bella refuses to consider having an abortion, and enlists Rosalie's help to protect her wishes.

Opposed to Sam Uley's plans to kill Bella and her child, which is thought to be a demon, Jacob angrily leaves the pack and arrives at the Cullens' to protect Bella; Seth and Leah Clearwater join him, forming a new wolf pack. As the pregnancy progresses, Bella's health severely deteriorates. As a last resort, she begins drinking blood, which satisfies the fetus and allows her to regain some strength. Soon afterward Bella goes into a painful labor and gives birth to her daughter, Renesmee. To save her life, Edward injects Bella's heart with his venom to transform her into a vampire, but nothing happens, and Bella is thought to be dead. Greatly distraught, Jacob attempts to kill the baby, but stops when he realizes he has imprinted on the child, becoming her protector.

When the werewolves learn of Bella's "death", they attack the Cullens' house to try to kill the baby. They are forced to stop after learning Jacob has imprinted on Renesmee, which, under their wolf law, means Renesmee cannot be harmed. Bella's wounds heal; she remembers her entire life as the venom reaches her heart. The Cullens all look at each other in shock. Bella's heart finally ceases, and she awakens with red eyes, a newborn vampire. The film cuts to the credits.

Finally watched this movie but I only enjoyed the 2nd half. The first half was lacklustre, except for the wedding. Too dragging, their lovey-dovey scenes have lasted at least an hour before she gets pregnant! Honestly, the whole book could have fitted into 1 movie and doesn’t require 2 parts to complete, perhaps a 3 hour movie instead of 1.5 hrs x 2 >.< Anyway, Edward looked fake the whole time especially when he was supposedly smiling. It somehow doesn’t feel genuine. Bella, on the other hand, kept showing more skin =.= Thankfully, Jacob was the best among the lot! Well, lets hope part 2 is more hyped and pumped up with more excitement!