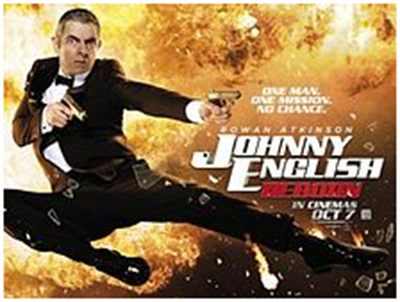 Johnny English (Rowan Atkinson) is learning martial arts in Tibet as penance for an earlier disastrous mission in Mozambique. His Tibetan guru and mentor, Ting Wang, is actually an MI7 sleeper agent: their employers have requested Johnny's services.

In Macau, his Chinese contact is murdered in a casino, but English discovers a poker chip in the man's hand with the address of ex-CIA agent Fisher (Richard Schiff) in Hong Kong. Fisher reveals that he is a member of 'Vortex', a secret cabal of assassins, who also sabotaged his mission in Mozambique. Vortex's power lies in a secret assassination weapon which require three metal keys to unlock, of whom Fisher has one. Fisher is killed by an assassin, (Pik-Sen Lim), dressed as a cleaner, but English manages to chase down and incapacitate the killer accomplice and recover the key. While bragging with Tucker about the success of his mission on a flight back to London, the key is stolen by a member of vortex disguised as a steward. English is humiliated in front of the Foreign Secretary and Pegasus at the latter's estate when it is discovered that the case is empty. English proceeds to assault Pegasus's mother twice, both times mistaking her for the killer cleaner.

Only 3 words… hilarious, hilarious, hilarious! Rowan Atkinson at his best although a little overdone at times. After a tiring day, a good movie to de-stress and wind down albeit tummy aches due to over-laughing our guts out! It may seemed like another James Bond spoof but this movie is more humane, showing more of Johnny’s sensitive side.