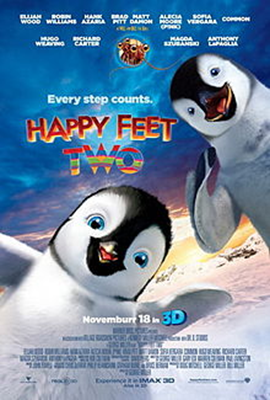 Erik, son of the penguins Mumble and Gloria, is reluctant to try dancing as most of the penguins in Emperor-Land do. Erik's first attempt at dancing embarrasses the other penguins. Erik and his two friends, Boadicia and Atticus, follow Ramon to Adélie-Land and finds that Adélie-Land has been ruled by a God-like penguin named The Mighty Sven. Sven is the last of his kind who survived death by his ability to fly. Erik instantly becomes enamored with Sven, who takes a liking to him. Sven and Lovelace tell the others that they were saved by humans. The two eventually flee and end up on Antartica, where Sven performs his first miracle by revealing moss to the local penguins. Sven uses his power of "Sven Think" to help Ramon find a mate. Ramon instantly falls in love with Carmen, another Adélie penguin who is uninterested. Mumble follows the chicks' footprints to Adélie-land and orders them to return to Emperor-Land, but they refuse. Sven sends Erik back to Emperor-land with Mumble.

Meanwhile, a group of krill are in the midst of a swarm. Will is an adventurous and existentialist krill determined to discover what lies beyond the swarm. His friend, Bill, reluctantly follows him to ensure his safety. Once separated from the swarm, Will and Bill realize that krill are at the bottom of the food chain, created to be eaten. Inspired, Will ventures out to evolve and "move up the food chain", eating a real creature instead of being eaten.

Meanwhile, Mumble tells Erik that he is unique to the world and that he will someday find his calling, but Erik dismisses his advice. While trying to cross a perilous ice bridge, the penguins encounter Bryan the Beach Master and his two young sons, who refuse to let the penguins pass. Suddenly the ice gives away and Bryan is trapped in a deep crevice below the ice. Mumble sets out to free Bryan by antagonizing a sleeping leopard seal until it chases him down. Unknown to them, Bill and Will try to eat a creature with a face that awakens the seal, but Mumble saves him. Seeking acceptance from Erik, Mumble is disheartened to learn Erik attributed the feat of courage to Sven Think. Bryan returns to the Elephant Seal beach, but not before thanking Mumble and promising to return the favor to him at any time.

Another simple and beautiful animated movie, with nice animated scenes and snow. It's kinda predictable but still entertaining.Good to watch with the family.