MPOV: The Sorcerer and the White Snake 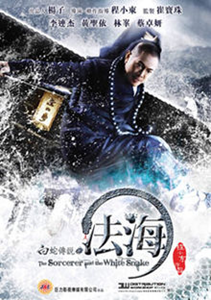 The film starts with Abott Fahai with his assistant Neng Ren going to a front door to a snow blizzard. The ice harpy appears at the top of the mountains. Neng Ren starts to get her but the Ice Harpy freezes him. Fahai and the Ice Harpy start to talk then they start to fight each other. At the end of the battle, Fahai traps the Ice Harpy with his demon trapper which unfreezes Neng Ren. Fahai asks his assistant to confine her at Lei Feng Pagoda and the two of them goes back to the door which disappears when it closes. Later the films moves to Jin Shan temple, a place where monks pray to Amitabha. At Lei Feng Pagoda, Neng Ren goes upstairs to go to the magic circle where demons are trapped in. He tells the demons that if they make real progress in meditation, they well be released then traps the Ice Harpy in the circle. Then the movie now starts with mountains. One mountain has a waterfall and shows a naga slithering around while another one starts slithering with her. The two start enjoying their life and they look at the other mountains. Later, men who are climbing up the mountain to dig for herbs. The two nagas watch them while still looking for herbs. Qingqing, the green naga starts to give Xu Xian a scare which made him fall down the lake and Qingqing starts laughing. Susu assumes human form and saves Xu Xian. Susu kisses Xu Xian which makes a flow of vital essence. Later, Xu Xian wakes up and tells his friends what happened which only made them laugh. Soon, Fahai and Neng Ren found a victim of the bat demons, that they have to catch them tonight. They ride a boat while talking to Xu Xian. Susu starts thinking about the day she kissed Xu Xian. Their animal companions wonder why she's bothered. She explains that she wants to go to the human world just to see Xu Xian.

I thought this to be a movie of violence and fighting to the end since the lead was Jet Li. I was wrong, the story line was truly romantic, a sad love story which was more drastic than Romeo and Juliet. Well, Romeo and Juliet died in each other’s arm which was pretty fast and less painful. However the love birds in this movie was forced to be separated for the rest of their lives. She was locked up in the Pagoda where as he can only sweep and maintain the Pagoda outside. Isn’t that more painful? More endearing? More harrowing? Totally moved by the plot although the CGI was a little over done for my taste.