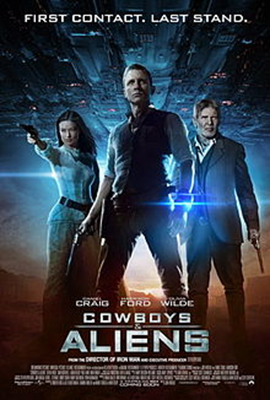 In 1873, Arizona Territory, an unnamed loner (Daniel Craig) awakens in the desert injured, with no memory, and a strange metal band shackled to his wrist. After beating three drifters who try to subdue him, he takes their clothes, weapons, and a horse and rides off. He wanders into the small town of Absolution, where the local preacher, Meacham (Clancy Brown), treats his wound. After the stranger subdues Percy Dolarhyde (Paul Dano), who has been terrorizing the populace, Sheriff Taggart (Keith Carradine) recognizes him as Jake Lonergan, a wanted outlaw, and tries to arrest him. Jake nearly escapes, but a mysterious woman named Ella Swenson (Olivia Wilde) incapacitates him.

Percy's father, Colonel Woodrow Dolarhyde (Harrison Ford), a wealthy and influential cattleman, arrives with his men and demands that Percy be released to him. He also wants Jake, who stole Dolarhyde's gold. During the standoff, alien spaceships begin attacking the town, and Percy, the sheriff, and many townsfolk are abducted. Jake shoots down one ship with a device concealed in his wrist band, ending the attack.

Dolarhyde, Ella, and some townsfolk form a posse to track an alien that may have ejected from the downed ship. Jake, meanwhile, travels to an abandoned cabin, and in a flashback, recalls returning there with the gold just before he and a woman, Alice, were abducted by the aliens. Jake returns to join the posse. During the night, the alien they were tracking appears and kills Meacham, who sacrifices himself to save Emmett (Noah Ringer), Taggart's grandson.

I’ve heard and read mix reviews of this movie. Like any other fantasy sci-fi, you have to set aside your expectations and watch the movie as it is. Anyway, there were too many dark scenes for my liking which made it difficult to watch. Luckily, the actions were cool but somewhat lame at some point. Some of the scenes actually reminded me Ben 10! LOL! All because of the huge device on Daniel Craig’s wrist!!! The storyline was ok lah… castings were also ok… I watched it not because of Daniel Craig but Olivia Wilde